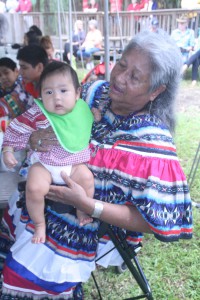 BIG CYPRESS — As the Ah-Tah-Thi-Ki Museum celebrated its 15th anniversary on Aug. 21, the Seminoles celebrated a victory for the preservation of their history and culture.

The institution remains true to its mission, as stated on the wall of the entrance lobby: “The Seminole Tribe of Florida’s Ah-Tah-Thi-Ki Museum collects, preserves, protects and interprets Seminole culture and history – inspiring an appreciation and understanding of the Seminole people.”

Museum director Anne McCudden welcomed the large audience that had assembled in the beautiful natural landscape behind the Museum to participate in this important anniversary.

“I was here on Aug. 21, 1997 as a guest at the ribbon cutting ceremony,” she said. “It was hot and rainy, but no one seemed to mind because they were attaining an important goal that they had worked hard to achieve. Today we applaud their perseverance because they created the foundation upon which we have spent the next 15 years building Ah-Tah-Thi-Ki, ‘a place to learn, a place to remember.’

“The initial staff comprised 10 individuals under executive director Billy Cypress and director David Blackard,” she continued. “Today we have approximately 25 on staff. The need for this facility was recognized in the 1980s with a first attempt in Tampa, followed by a mini-museum at the old Tribal offices in Hollywood. Acquisition of a library and collections had begun as early as 1989 and found their new home here at the grand opening. By 2004 we added the Curatorial Building, and four years ago we became the first accredited Native American museum.”

Laced with humor, historical background and personal reflections, Chairman James E. Billie’s narrative brought the humble beginnings of the Museum site to life for the audience.

“I made a camp on this site many years ago,” Chairman Billie said. “Standing here today brings back wonderful memories shared with many of my friends as we built the chickees and gathered around the fire cooking our meals, playing music and enjoying each other’s company. This camp was a place where I could come to get back to my roots.

“Since the Museum was supposed to be built for the people to preserve the culture and depict how we lived, it needed a traditional setting,” Chairman Billie continued. “I donated my camp because it was on the main road, centrally located on the edge of a virgin swampland and possessed sufficient acreage to promote our culture and allow for expansion.”

Members of the Tribal Council, the Seminole Tribe of Florida, Inc. and former Chairman Mitchell Cypress took turns acknowledging the achievements of the Museum. Brighton Councilman Andrew J. Bowers Jr. pointed out that it represents a great step forward in the preservation of the culture, and young people should put its programs to use and practice their culture 24/7.

“The Museum offers an opportunity to tell the truth about history from the Seminole perspective,” Aguilar said. “When people visit here, they learn who we were and who we are, rather than stereotypes.”

“It is my extreme pleasure to celebrate this anniversary with you,” said guest speaker Alma Douglas, of the Smithsonian Affiliations program. “At a time when museums are finding it hard to exist and a few are succumbing to economic pressure, I am so glad that you are here and thriving. Since Ah-Tah-Thi-Ki attained accreditation four years ago, it has been our pleasure to cultivate relations. There is a wealth of resources at the Smithsonian, and we look forward to sharing them with you.”

“My husband, the late Billy Cypress, enjoyed history and travel throughout his lifetime and made a career of education,” Cypress said. “As its first executive director, this museum is a wonderful tribute to his achievements and ambitions. He oversaw the building’s construction as though it had been his own home and worked diligently with director David Blackard to ensure the authenticity of its exhibits.

“I volunteered for the storytelling presentations, setting up the gift shop and assisted David Blackard and Brian Zepeda in the realistic dressing and appearance of the mannequins in the galleries,” Cypress continued. “Several members of my immediate family served as models for the sculptured faces in the exhibits. We had a great staff, and I feel as though this museum is a part of my family. It helps our young people learn what it is to be Seminole.”

Seminole artist Elgin Jumper recited his poem Seminole Warrior and expressed his gratitude to the Museum for its support of Seminole artists and craftsmen.

Author, historian and creator of photographic collections Patsy West was a member of the original museum staff and applauded the continued progress of the Museum during the past 15 years. She indicated that its exhibits and extensive projects and educational programs are a vital step in the preservation of the Seminole culture.

“It was a highlight of my life to have been on the original staff of the Museum,” Zepeda said. “I worked with Billy to design and construct a fully functional Seminole village. Just prior to the opening, I completed the final loop of the boardwalk to create the least possible invasive means for visitors to experience a glimpse of the homeland of our culture. Organizing the historical reenactments and participating in the American Indian Arts Celebration were a wonderful experience.”

The renown Florida artist and long time friend of the Seminoles Guy LaBree shared his deep respect for the Museum’s accomplishments when he said, “I strive to capture a moment in time in the history and culture of the Seminoles on canvas, while the Museum is capturing their past and present within these walls, the traditional village and their outreach programs. They are preserving and documenting an entire culture, and their achievements in the first 15 years have been awesome.”

In conclusion, LaBree said, “Listening to James Billie reminisce about the days when his camp occupied this site, I couldn’t help but look back on a night that I spent on this very spot alone in one of his chickees. About midway through the night, I was awakened by a soft panting sound. I opened my eyes to find that I was face-to-face with a bobcat. I don’t know who was more afraid, me or that cat. It makes me very happy to see that the Museum is maintaining the natural beauty of the cypress swamp and its inhabitants because that is an integral part of the Seminole story.”

A cultural Seminole feast had been provided for the occasion by Big Cypress Councilman Mondo Tiger and his assistants. Armed with gigs, CouncilmanTiger, Charlie Cypress, Raymond Garza and Wovoka Tommie worked the local waterways and secured gar and mud fish to be cooked over the open fire with deer, swamp cabbage, frybread and an array of traditional favorites. Tribal senior Louise Motlow offered the blessing and invocation for the event. Two enormous celebratory cakes concluded the meal.

A retrospective video, How it All Began, was prepared by Seminole Media Productions for continuous viewing at the celebration. It featured commentaries by key participants, historical facts and a brief preview of the many aspects of the Museum programs and achievements.

Behind the scene tours were conducted throughout the afternoon and participants were given a chance to meet artist Marty Bowers in the Mosaic Art Gallery. Pedro Zepeda demonstrated the art of wood carving and its cultural significance. As the visitors explored the galleries, they became aware of numerous opportunities available through the Museum’s many resources.

When future generations ask, “Who were the Seminoles?” the Ah-Tah-Thi-Ki Museum will hold the answer. It is a comprehensive connection with the past, documents the present through extensive interaction and opens a window to the possibilities that will ensure the future through its educational and cultural programs.