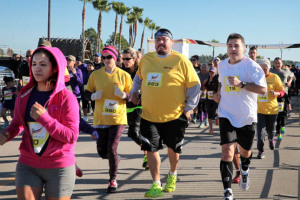 IMMOKALEE — They came to Immokalee from every reservation – more than 400 people dressed in team colors, pumped up and ready to win the battle for good health during the 15th annual Rez Rally.

Runners, walkers, strollers and wheelchairs navigated the 5K course Jan. 17, and at the end of the day, Immokalee came out on top. The reservation claimed two trophies for most Tribal member participants and for overall team participation.

“As always, our theme has been ‘Together we can manage diabetes,’” said Connie Whidden, director of the Health Department. “This teaches our children the benefits of walking.”

Before a gun signaled the start of the race, a DJ woke up the crowd with high-energy tunes. Chairman James E. Billie got the competitive juices flowing and the crowd cheering with a roll call of clans. Tribal leaders then took turns motivating the reservations.

“It’s always good to see the turnout,” Big Cypress Board Rep. Joe Frank said. “It’s not just about Team BC; when we all are here, it’s Team Seminole.”

But that didn’t stop each reservation’s representatives from rallying their own teams.

“All these yellow shirts from Brighton means it’s a bright day,” Brighton Board Rep. Larry Howard said. “This cause is good for the Tribe and very important; let’s stay healthy. Let’s go Brighton and Tampa!”

“Let’s go Hollywood!” Hollywood Councilman Chris Osceola said. “It’s good to promote good health in the Tribe. It means we’ll be around longer for our kids. Let’s use this day as a launching pad for the rest of the year.”

“This is for our health and for bragging rights,” Big Cypress Councilman Mondo Tiger said. “Let’s go BC!”

Hollywood fitness trainer Jay Garland led the group in a series of stretches and then participants trekked to the starting line.

“It’s always fun rallying everyone to come out,” said Cecilia Pequeno, an Immokalee team captain. “We’ve had a couple of pep rallies and we have the mindset to get through it.”

Immokalee boasted the most participants with 135, Brighton and Tampa sent 113, Big Cypress had 83 and Hollywood was represented by 74. Brighton competitors earned 32 medals, followed by Hollywood with 25, Immokalee with 24 and Big Cypress with 16. Each winner received a trophy and a handshake from Council and Board members.

“We do our best to create both a competitive environment to challenge those that are very fit and a fun-filled event to encourage those who are new to fitness to take their first steps on their path to wellness,” Davis said. “This event has been shown to ignite behavior change in participants. Incorporating healthy habits on more than race day is what the Rez Rally is really all about.”