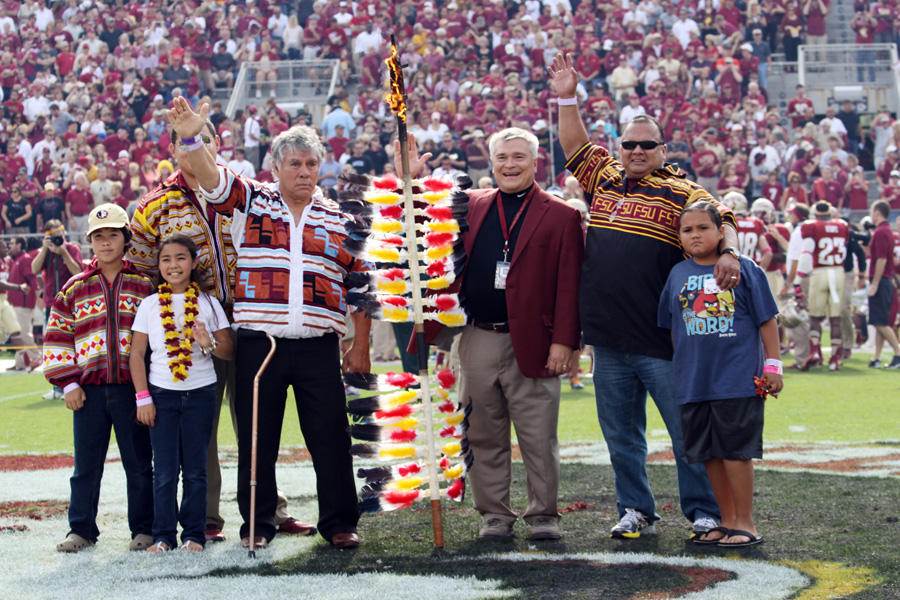 “To be able to come out and share the activities at Florida State is a tremendous honor,” President Sanchez said. “I think the relationship the Tribe has with the university is just our way of showing our commitment to the school.”

The pregame rite of FSU symbol Osceola riding down Bobby Bowden Field on his Appaloosa horse, Renegade, and planting his flaming spear on the 50-yard line began in 1978. Since its inception, only Chairman Billie, President Sanchez and FSU alumnus Kyle Doney have had the honor of assisting Osceola in the tradition that symbolizes the Seminoles’ warrior spirit.

“The relationship between the Seminole Tribe of Florida and Florida State University is very unique; you won’t find anything comparable between any other Tribe and university,” Doney said. “As a member on the FSU Alumni Association’s National Board of Directors, I was privileged to share a role in asking Chairman Billie and President Sanchez to participate in FSU’s Homecoming events and the Tradition of Tribute.”

The tradition of crowning a princess at FSU began in 1948, and Gloria Wilson became the first Seminole princess to crown the FSU Homecoming court in 1976. Since then, Seminole royalty have carried on the tradition, and Aguilar and Nunez did the honors in front of about 80,000 fans at Doak Campbell Stadium this year, which served as a highlight of the weekend for the girls.

“Florida State is based on tradition, and that’s how we’re raised,” Aguilar said. “When we were walking down the 50-yard line and the band was playing, it was so amazing. That’s the only time I’m going to get to do that, so I’m glad it was awesome.”

Both Aguilar and Nunez have goals of attending FSU upon their high school graduations, and the weekend, which included their first FSU football game, reinforced their commitment.

“I’ve always wanted to come to FSU,” Nunez said. “It’s such a great feeling knowing that all these people know who we are.”
Both princesses felt honored to represent their Tribe.

“I’m always humbled to be in this position,” Aguilar said. “I’m so honored to be chosen to do this for my Tribe.”

“It’s been overwhelming, but then again I can’t believe all the things I get to do,” Nunez added about her experience. “It’s such a great feeling.”

For FSU alumna Toni Sanchez, the Homecoming game meant another opportunity to perform with the Marching Chiefs. She played the trumpet in the band during her college career and relishes the opportunity to come back and play as an FSU graduate.

During the annual Homecoming Parade on Oct. 26, Chairman Billie and President Sanchez served as the grand marshals, while the Seminole princesses and Tribal FSU alumni – including Doney, Christine McCall and Doug Zepeda – were also recognized. They traveled via convertibles through FSU’s campus, waving to thousands of cheering onlookers. Osceola and Renegade followed behind them.

“FSU is very proud to have the Tribe as their symbol,” McCall said. “They’ve always shown great respect to the Tribe. Not only am I a Florida Seminole, but I’m an FSU Seminole. I’m very proud.”

The presence of the Seminole Tribe at FSU has continued to grow since former FSU coach Bobby Bowden and former Renegade caretaker Bill Durham conceptualized the idea of using Renegade and Osceola as the university’s symbols and asked former Chairman Howard Tommie for official permission in 1977. Tribal members have not only participated in FSU football and Homecoming traditions, but Tribal enrollment at the school has increased as well.

To date, eight Tribal members have graduated from FSU, while an additional five have enrolled this fall – the most students ever enrolled at the university at the same time.

“That shows me that the future of the Tribe is very bright,” President Sanchez said. “I think it’s really important for us to be here not only to show our support to the school but to the students as well.”

“FSU loves us to come here, which makes us feel good,” she said. “It’s fun for us, and the students love it. I love seeing the kids (Seminole royalty) so excited to be down [on the field]. They get exposure to the school and say they can’t wait to attend here.”

FSU President Barron said he appreciates the support of the Seminole Tribe and their participation in Homecoming weekend.

“This is part of our spirit and our being,” he said. “We work hard to maintain our traditions in a way that honors the Tribe. Having their support for what we do makes our traditions so much richer.”