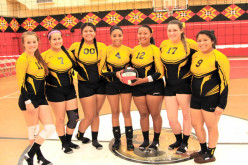 BRIGHTON — Sports teams at Moore Haven High School are known as the Terriers, but this season the varsity girls volleyball squad might as well be called the Seminoles.

Seven of the team’s 10 players are Seminole, as is coach Holly Johns. Sometimes during matches it’s a Seminole full house with all six positions on the court – libero, setter, hitters, blockers – occupied by girls from the Brighton Reservation.

Regardless of how the team fares this season with wins and losses, it will certainly be a memorable year for the Seminole Seven: senior Delaney Osceola; juniors Tyra Baker, Kalgary Johns and Trista Osceola; sophomores Sydnee Cypress and Courtney Gore; and freshman Sunni Bearden.

“It’s pretty cool. We all get to play together. It’s fun,” Tyra said.

“Since we’ve all grown up around each other and know each other really well, it helps us on the court,” Kalgary said.

The team has had its share of players from the reservation in the past, including four last year, but the number received a boost this season with a pair of transfers and the addition of Sunni.

“Being with the girls I’ve grown up with has been really interesting,” said Delaney, one of the team’s top hitters who transferred from Okeechobee High for her senior year. As the only Seminole senior and the oldest of the seven, Delaney said she takes some good-natured ribbing from her younger teammates.

“She’s a big part of the family, so we can’t pick on her too much,” Courtney said.

Being one of only two seniors from the class of 2015 on the team does have its benefits, such as more attention that will come her way on senior night.

“I think it’s pretty cool, but I’m not ready for it,” Delaney said.

Four players – Tyra, Courtney, Trista and Kalgary – have been teammates since about age 8 when they first started playing volleyball on travel teams coached by Holly Johns.

An additional caveat for the Seminole contingent is the team’s home court this season. Because a new gymnasium is under construction at Moore Haven High, the Terriers play all home matches at the Brighton Gym.

“We’re happy to be playing on the rez in our home gym,” Courtney said. “I’ve been on the rez my whole life. This gym is home. Sunni lives right across the street. The rest of us live down the main highway. If we want to play volleyball, we just call each other.”

Apparently no tears were shed when Moore Haven’s gym was torn down. Players said they’ll remember the venue for its age – close to 50 – and lack of comfort.

“It was one of the only gyms in Florida that didn’t have air conditioning. It was really hot,” Sydnee said.

“It had a big roof and the floor was awesome, but it was just hot,” Courtney added. “We’re just happy we’re going to have air conditioning next year. I have asthma. It was killing me.”

Players said the new gym might be open in time for the school’s basketball season. A few of the Seminoles also play on the girls basketball team, but softball is the main sport for most of them. Last season, Moore Haven softball – whose Seminole varsity representation included Sydnee and Kalgary – made it all the way to the Class 3A state final. As an Okeechobee student and spectator at the time, Delaney attended the final.

This year she hopes to play in it.

“I went to watch them. Hopefully I can play in the state championship my senior year,” she said.

For now, the focus is on volleyball.

Moore Haven lost its first three matches but enjoyed a successful home debut in Brighton Sept. 8 with a 3-0 win against Ahfachkee. Another win came Sept. 17 against Clewiston.

Besides losses against tough competition early in the season, another obstacle the team has encountered comes every day after school. Because of construction, practices are held outside on a sand court, where footing is vastly different than indoors.

“It’s been a lot harder. It’s hard to run the rotations on the sand,” said Holly Johns, who is in her second season as a head coach at her alma mater. She played on Moore Haven’s volleyball team in the old gymnasium.

“Just going to school in Moore Haven was really fun, a very small group, almost like the Charter School out here. It’s the same concept. Small group and very close,” she said.

That concept applies to her players as well, even after losses on the road.

“On the way back, win or lose, we’re still a family,” Courtney said.