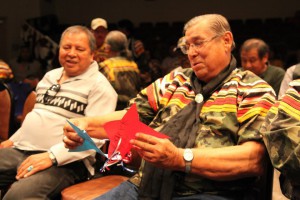 MacDonald, 84, is among the youngest of the remaining Navajo Code Talkers – Native soldiers who developed a secret, “unbreakable” code using words from the Navajo language that proved instrumental to victories in World War II.

“You’ve heard the saying, ‘If you can read, thank a teacher; if you can read English, thank a veteran,’” said master of ceremonies Stephen Bowers. “Maybe it should also say, ‘If you aren’t speaking Japanese, thank a Code Talker.’”

Seminole Tribal poet laureate Moses Jumper Jr. took to the podium with an original poem that “depicts what I think about this day and what Veterans Day means to me,” said the Seminole veteran. His poem began, “I am in awe as I stand among these warriors gathered here today/ Proud and honored for the sacrifices they made/ Words alone cannot express what this day means to me/A large price was paid that I might speak here of being free…”

Chairman James E. Billie and MacDonald sat next to each other on the stage throughout the program, which was broadcast on jumbo screens visible from all angles of the room. Seminole Media Productions also broadcast the event online as a live stream.

Chairman Billie welcomed the crowd, reminding them to “lead, follow or get the hell out of the way!” and the preschoolers scurried about the audience handing out homemade cards to Seminole veterans, many who wore camouflage.

Former Chairman Mitchell Cypress presented the history of Seminole Veterans Day, which began when he and fellow veterans Roy Nash Osceola and Jacob Osceola “got together with six packs to tell stories,” said Cypress, who was approached not long after by the parents of Lance Cpl. Herman L. Osceola seeking a way to honor their son, who was killed in a helicopter crash in South Korea in 1984.

“The first one was a hamburger/hot dog event on the ballpark in Big Cypress,” the former Chairman said. “My belief is that we are educating outsiders. Outsiders think we are nothing but casinos. They see a Seminole and they think casino. But from the time the Mayflower came ashore, we’ve been fighting. We were fooled once, but we won’t be fooled again. Our younger generation will learn the benefits of being a veteran.”

Then it was time for the guest speaker, MacDonald, who lavished sincere praise on the Seminoles “for this wonderful building.” He began his formal remarks with a few statements in the Navajo language. “That’s not talking in code,” he quipped. “That’s plain Navajo.”

He recounted the early fighting of Tribes over sovereignty and self-determination, characterizing leaders Wendell Chino (President, Mescalero Apache), Roger Jourdain (Chairman, Red Lake Band of Chippewas) and Chairman Billie as “real fighters and leaders of their people. We wanted it our way. We wanted what rightfully belonged to us.” He presented an authentic Navajo blanket to the Chairman, who ordered that it be hung in the Veteran’s Building.

MacDonald regaled the audience with tales of the Code Talkers who processed 800 radio messages during the first 48 hours of fighting at Iwo Jima “without a single mistake,” he said.

Councilman Bowers told touching anecdotes about his longtime friendship with Joe Lester John: “…sneaking into drive-in theatres, sitting up in Australian pines. We drove to school every day; he would drive one week, and I would drive the next. In football at Okeechobee, he wore (No.) 23, I wore 33. In 1963, the Indian students all transferred to Moore Haven; Joe and I stayed in Okeechobee.”

Councilman Bowers described John as “a real quiet person; he didn’t say much,” with the exception of when Okeechobee beat Clewiston “on the night of the JFK (John F. Kennedy) assassination. He kind of exploded, the one time I saw Joe get emotional.”

Veteran Dan Bowers, who had to miss the event because of a dialysis appointment, addressed the crowd on behalf of Wonder Johns via a pre-recorded video.

Wonder’s widow, Mary Louise Johns, and Jack Smith Jr. accepted a plaque beneath the big screen as Dan Bowers spoke of the great benefits he and his pal Wonder received during their military service.

“One of the main things we talked about, we all had to go through boot camp or basic training,” Bowers said. “Basic training took the laziness out of you. And Wonder lived up to being active all through his life. I’m thankful I got to know him all these years. Even today I miss him. I think he’s in a better place.”

Staff Sgt. Gabriel Coppedge (U.S. Army) greeted his family and fellow Tribal veterans, appearing by way of Skype on the multiple overhead screens. Coppedge enlisted in 2004, completed a tour of Afghanistan from 2006-2007, served in Iraq from 2007-2008, and after his honorable discharge in 2009, he joined the Army Reserves and is currently serving in Kuwait, attending school in pursuit of a doctorate in psychology with a specialty in counseling returning veterans from the Gulf Wars, Stephen Bowers said.

Bowers read a powerful essay, We Did What Had To Be Done, and surprised MacDonald with a gift of a Seminole camouflage veteran’s shirt (which MacDonald had been admiring all morning) prior to the reading of the Seminole veterans’ names by Ben Humphries, President of the State Council Florida VVA. Taps was played by U.S. Army Airborne Ranger Larry Morse, while Humphries and VVA Regional Bureau Chief Marc McCabe recited the names of fallen Seminole soldiers.

During the luncheon following the ceremony, outside, John Rowan, President of the VVA National Office, presented a plaque of appreciation to the family of the late soldier and Brighton resident Charlie Gopher.

Veterans Day was celebrated a week early because many Seminole vets are planning to attend the 30th anniversary of the Vietnam Veterans Memorial Wall in Washington, D.C. during that weekend.