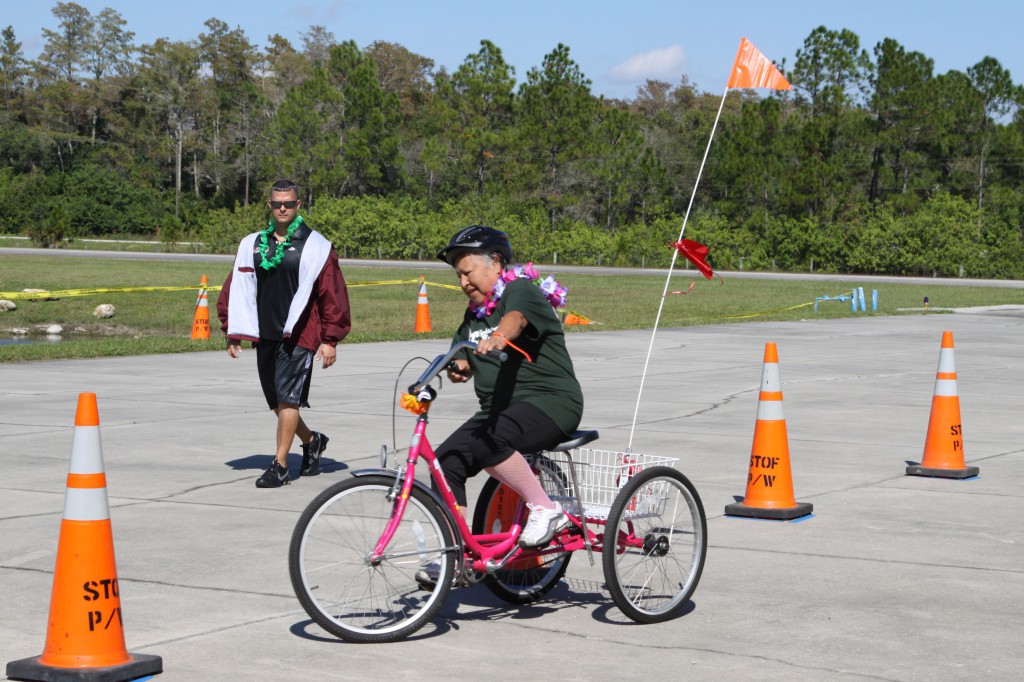 “I guess practice makes perfect ‘cause we got the big trophy back,” said Brighton competitor Elbert Snow. “We’ve been having practice for three to four weeks. [The win] made us feel good.”

About 60 seniors gathered at the Big Cypress Aviation Hangar for the eighth annual Senior Trike Fest, which included a variety of courses and obstacles, as well as friendly competition among the Brighton, Big Cypress, Hollywood, Tampa and Immokalee reservations.

Health Department director Connie Whidden said the event keeps seniors active and healthy while offering a chance for them to interact with Tribal members from different reservations. And because many reservations practiced for weeks prior to the event, it meant additional exercise for the seniors.

“It was good seeing everyone out,” she said. “It turned out good. Everyone seemed happy.”

Seniors competed in five events aimed at testing their coordination and skills on a tricycle: the target toss, the maze, the cone weave, the puzzle challenge and the ladder ball (the only event not performed on a trike). In addition, the reservations competed in team relays that served as a highlight of the event.

Each team consisted of five people, with the first four teammates competing in the cone weave relay and the fifth one piecing together a puzzle to finish the relay. Brighton swept passed the competition with a time of 4:59.00, while Big Cypress placed second (5:37.59), Hollywood placed third (10:58.84) and Tampa placed fourth (11:33.10).

“It’s a good thing for the seniors,” Brighton Board Rep. Larry Howard said. “It’s all about the seniors’ health. I think there should be more things for them to do like this.”

For the fourth consecutive year, Team Tampa also won for Most Participants by Percentage with 46.15 percent.

“We tried the best we could,” said Tampa competitor Nancy Frank. “We practiced and decorated a bike. It looks like Hawaii now.”

“I’ve been part of this since it first started,” said Big Cypress competitor Edna McDuffie, community outreach coordinator for the Health Department. “It has grown tremendously. This is a good event, and I love to see everyone come out from the other reservations.”

“They’re an example of what practice and hard work can do for you,” he said.