Skip to content
You are here
Home > Community > Seminole recipe: How to make pumpkin frybread 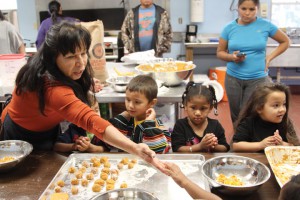 The holidays are here, a time for togetherness – usually centered on the sweet and savory dishes pouring out of the cooking chickees for Seminoles. One crowd pleaser guests are sure to look forward to is pumpkin frybread.

Pumpkin frybread is a traditional Seminole food that has been made for as long as Jenny Johns can remember. Johns, of Brighton’s Culture Center, said early Seminoles grew their own produce, including pumpkins.

“We ate off the land, so we tried to grow everything we can grow,” she said.

Throwing seeds onto fertile soil easily sprouts pumpkins after a few months, she said. Although pumpkins are typically harvested in the fall, canned pumpkin makes it available year-round. So, pumpkin frybread may appear at any given holiday party or special occasion.

As with most Seminole foods, women are the experts when it comes to making pumpkin frybread, and it’s never too early – or too late – to learn. On a cool day earlier this month, both 19-year-old Sheila Fornter and several Brighton Preschool students could be found in the Brighton Culture Center’s kitchen learning for the first time.

“It’s part of our culture,” Johns said. “Plant, harvest and prepare as food to eat.”

On warmer days, Johns and her students are outside under a cooking chickee. Regardless of whether it’s made on a stove top or over an open fire, the basic steps are the same and the end result is just as sweet: hot, soft pumpkin frybread.

However, as with any food, there are plenty of variations. For instance, some add water to the batter, while others, like Salina Dorgan, add milk.

“The milk makes it softer,” Dorgan said of the tip she picked up from the late Agnes Jumper. “It has more of a fluff.”
Dorgan also adds a sprinkle of cinnamon sugar for a distinct flavor, which she said helped her win first place at a recent cooking contest in Brighton.

“Everyone has their own way of making this,” Johns said.

There are also endless ways to eat it. While the consensus seems to be that it’s best plain, some dust it with powdered sugar after it’s cooked, and Dorgan has even seen a few people spread butter on it.

The Culture Center recently served pumpkin frybread to preschoolers with juice as a snack, but Johns said – and many will agree – that it goes down easy with any meal. Jennifer Osceola likes it for dessert, while Paulette Lawrence enjoys it as a snack. Dipping it in meat gravy with a meal never seems to be frowned upon either among Tribal members.

The recipe is shared below from Johns and the Brighton Culture Department, but many Tribal members agree that cooking is more of an art than a science. 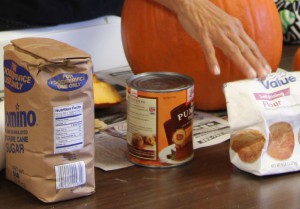 1. To make the dough, mix pumpkin, sugar and flour together in a bowl.

If you have time, cover the batter in tin foil and let it sit overnight. That way, it starts to rise and is less sticky to work with. The end result will be fluffier. 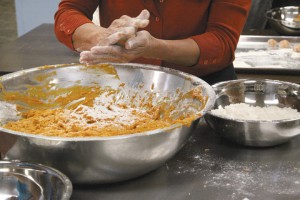 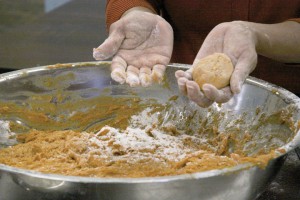 2. To divide the dough, lightly coat hands in flour and roll small handfuls of dough into balls.

Unused pumpkin dough can be frozen for later use. Like anything else, you must let it thaw out before cooking it. 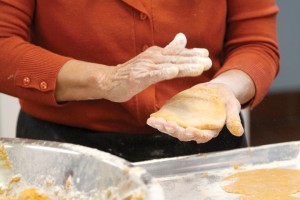 3. To shape the dough, flatten balls into pancake-like discs. Add flour to your hands as needed to keep the dough from sticking to your skin.

Flattening methods include patting it with your fingers flat like you’re clapping your hands or using the tips of your fingers to press the dough outward from the center. 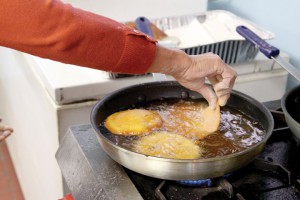 4. To cook the dough, carefully slip the discs into a pot or pan of oil boiling on medium-high heat.

If you’re reusing the oil continuously, make sure you change it out when it starts to darken in color. Otherwise, the bread will burn more easily. 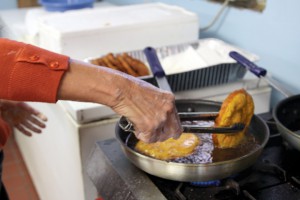 5. Once the edges start to brown, flip the bread over with tongs. The other side cooks quicker, so be sure to check on it. If it floats up, it’s usually done. 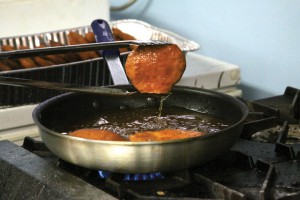 6. To remove the dough, wait until the bread reaches a medium-brown color. Then, use tongs to pull it out of the oil. Let excess oil drip into the pan. 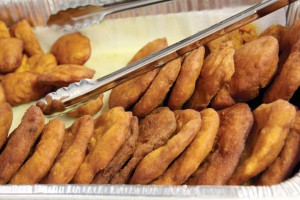 7. Place the bread on a paper towel to absorb some of the oil before serving. 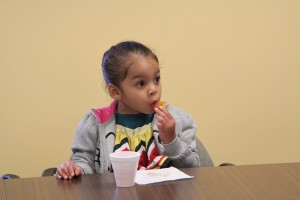 • Don’t knead the dough too much or it will get tough and make the end product chewier than desired.
• Don’t forget to pat the dough flat and thin before you cook it. If it’s too thick, it won’t cook thoroughly and will result in a moist, raw center or a burned outside.
• Make sure you watch the bread while it’s cooking. Since there’s a lot of sugar in the batter, it can burn quickly if it’s not watched closely.
• Remember to eat pumpkin frybread in moderation since it is high in sugar and oil content.

26 thoughts on “Seminole recipe: How to make pumpkin frybread”