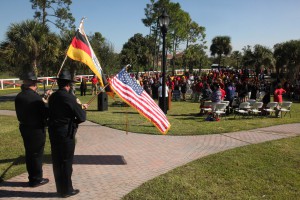 BIG CYPRESS — To many school children, Veterans Day means a three-day weekend. To impart the meaning behind the holiday, Ahfachkee School held their first Veterans Day celebration on Nov. 9 at the Big Cypress Fitness Trail.

The student-led program included readings about veterans, the history of the day and patriotic singing. Four honored guests attended, all veterans of wars from Vietnam to Afghanistan.

“We want the students to understand the holiday, why it exists and bring honor to veterans,” said Lucy Dafoe, Ahfachkee principal.

The students ran the program and their hard work paid off.

“A lot of the younger kids don’t know why we have a long weekend,” said 11th-grader Kaylan Osceola, 16, the emcee of the event. “We’re just saying thank you to our veterans.”

The program got off to a rousing start with a welcome prayer, a presentation by the Seminole Police Department Color Guard, and singing of the national anthem and the pledge, both American and Seminole, led by students Eyanna Billie and Charlie Osceola. Then the students gave heartfelt speeches about veterans.

“We honor the sacrifices of veterans,” said 11th-grader Malari Baker, 16. “They are part of our families, community and are vital to society. If you see a veteran, be sure you say, ‘Thank you.’”

Savannah Tiger, an 11th-grader, put the cost of freedom into perspective for her peers.

“Freedom is never free; it is paid for with the sacrifices and ultimate determination of veterans,” said Tiger, 16. “Native Americans have taken up arms to protect their people since Micanopy, Sam Jones and Osceola. The sacrifices of our elders and ancestors are visible today, since many buildings are named for them. We must remember that freedom is never free.”

The four veterans at the ceremony were former Chairman Mitchell Cypress; Curtis Canton, of the Building and Grounds Department; and Ahfachkee teachers Gary Chaffin and Elizabeth Jack. Each spoke of their experiences in the military and stressed the value serving had on their lives.

Former Chairman Cypress served in the U.S. Army from 1968-70 and told the children how veterans at that time weren’t given a warm welcome home by the public.

“Native Americans always welcomed their warriors back home,” Cypress said. “Today, there is no draft, but somebody has to sacrifice for you to be here. You are young, so you will be the ones who will keep our freedom. Make sure you think about our freedom and the sacrifices made for it.”

Curtis Canton shared his feelings about serving in the military, where he worked on fighter jets and bombers in Germany, Turkey and Saudi Arabia.

“There is a sense of accomplishment when a pilot comes back in a jet I worked on,” Canton said. “There is nothing in the world like it. We were taught respect for others, and it becomes routine; it sticks with you. I am an advocate for the military, and I want you all to consider it.”

After the ceremony, students and teachers lined up to shake the veterans’ hands.

“There was a lot of eye contact, more than you usually get from kids, and some extremely firm handshakes,” Canton said after the ceremony. “I think we really hit home our message to the kids.”

“It’s always a good feeling that somebody cares,” Cypress added. “Maybe this was a little wake-up call for the kids; I’d like them to be part of the military. I’m proud they all came by and shook our hands; we must have delivered a good message.”