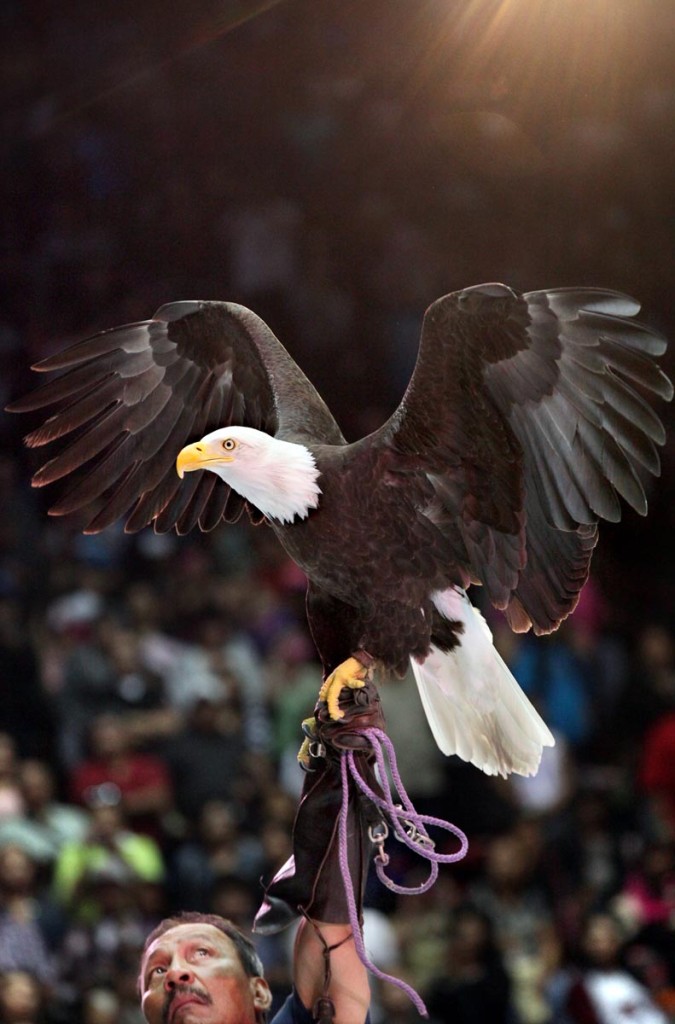 ALBUQUERQUE, N.M. — Dozens of drums and thousands of voices filled “The Pit” arena floor at the University of New Mexico to reconnect ties that bind Indian Country peoples from Canada, the United States and Mexico.

“We look across this sea of people and see our colors of red, yellow, white and black … the four winds, the four corners of our country, the four races and we are the strongest race of all,” said announcer Dennis Bowen Sr., of Tuba City, Ariz.

More than 100,000 people from nearly 700 Tribes attended the 31st annual Gathering of Nations Pow-Wow April 24-26, which included the Miss Indian World pageant. Honor and pride echoed from the start of every grand entry ceremony through all dance and drum competitions and to each final award presentation.

Stage 49 – referring to the slang for singing party or all-night, after-pow-wow party – provided a continual music concert starring indigenous artists worldwide. The schedule embraced 54 acts that ran the gamut of music genres from First Nations traditional to reggae, rock, hip hop and soul, as well as a smattering of dancers, comedians and magicians. The intertribal comedy team 49 Laughs headlined.

Patricia Lopez, of the Pueblo Nation in New Mexico, was one of nearly 3,000 singers and dancers who turned out to participate in the grand entrances and in women’s traditional dancing competitions.

“First, dance is a prayer and when many people dance together it is a very powerful prayer. Today, to be with brothers and sisters from Mexico, the U.S. and Canada makes it even more powerful,” said Lopez, dressed in the Northern tradition with heavy embroidery and bead work.

Elders, veterans and current warriors were honored throughout the pow-wow. Gourd Dances paid tribute to those who stand up for good and against oppression by serving Tribal communities and all mankind in the military, civic service, education, medicine, law and other segments of society.

Seminole Tribe member Stephen Bowers and his wife, Elizabeth, manned the American Indian Veterans Memorial Initiative (AIVMI) booth to educate about the campaign to place the first statue in Washington, D.C. that will honor Native contributions in U.S. wars. In December 2013, President Barack Obama signed into law an act to place the statue on the grounds of the National Museum of the American Indian. Further, through a relationship with the Vietnam Veterans Memorial Fund, a section of The Education Center at The Wall, to be built in the future, will be dedicated to Native participation and the 227 American Indian, Alaska Native and Pacific Islanders who died during the Vietnam War.

“Coming out to where a lot of Indians are makes a difference in spreading the word,” Bowers said. “Here we are in New Mexico’s Land of Enchantment, which is also the land of the Pueblo. We’re verbally telling everyone.”

The venue reverberated in pounding heartbeats as drumming and singing groups with names like Young Bear, Bear Nation and Thunder Crew competed among themselves and accompanied ceremonies and dancers.

“I want our people to hold onto our history and our love … That is why I stand here today,” said Chasing His Horse before thanking the Creator with a Lakota prayer.

Comanche activist LaDonna Harris, president of Americans for Indian Opportunity, was held in the spotlight for the last Gourd Dance of the weekend. Harris’ 40 years of work to educate non-Natives about Indian culture and social issues includes 20 years of her renowned youth ambassador program that inspires the young to maintain cultural beliefs while they take on the world on and off the reservation.

“We don’t have to leave our values at the reservation or our home. You have to take them with you and be that person all the time wherever you are,” Harris said in an interview with Tara Gatewood, of Koahnic Broadcast Corporation’s Native America Calling.

For members of Danza Azteca Chichimela, just getting to the pow-wow was a feat. Troupe dancers and musicians, all indigenous to South America but none affiliated with a recognized Tribe, traveled from Los Angeles, San Fernando and San Gabriel Valley in California.

Sergio Ruiz, of Los Angeles, said the Aztec troupe was allowed to dance in the grand entrance and on Pow-Wow Alley, but they were not sponsored by the Gathering of Nations organization.

“We are here through the grace of the Creator. Just to be here with our Native brothers and sisters is enough. It’s about sharing our specific cultures, and regardless of how we got here, we came to share,” Ruiz said.