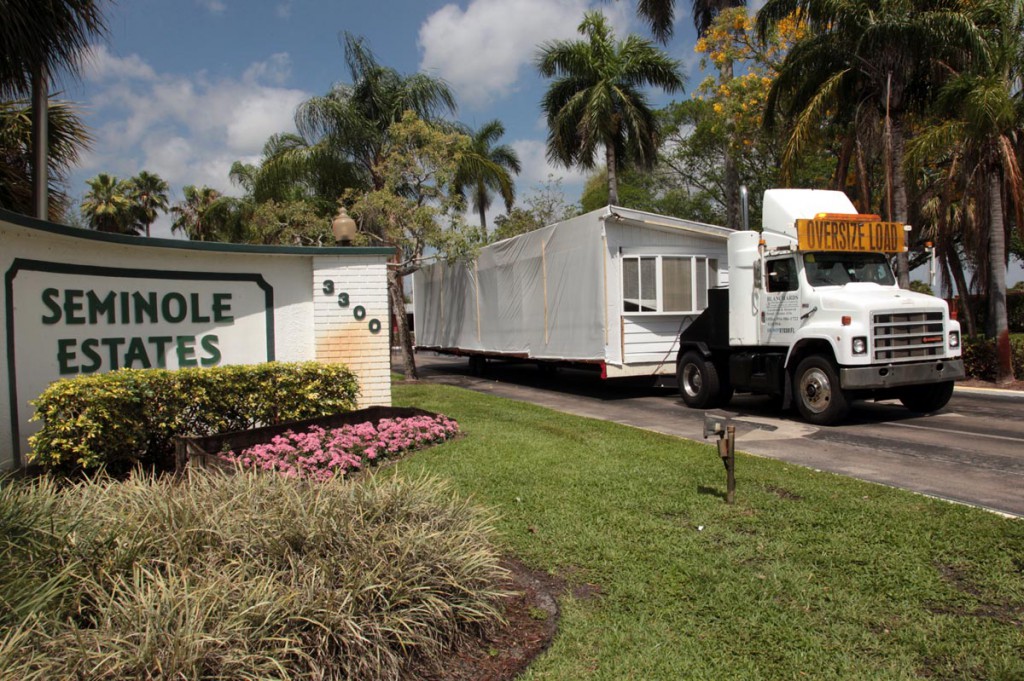 HOLLYWOOD — For the first time since 1969, the Tribe has taken charge of the property formerly known as the Seminole Estates Mobile Home Park. The 110-acre property, located on U.S. 441 on the Hollywood Reservation, became the responsibility of the Tribe on July 1.

The Tribe has considered many ideas for the site, and during the July 14 Tribal Council meeting, Council approved a facility for the 4-H Department on the property to house hogs, steers and horses. Other future plans are undefined at this time. The land is currently being cleared of all remaining trailer homes and readied for any development to come.

The cleanup is expected to be completed by the end of the year.

“There is no game plan for the property now,” said Adam Nelson, Tribal Community Development executive director. “It will take until the end of September to clear the remaining trailers from the site.”

Council voted to close Seminole Estates on Sept. 15, 2012, deciding not to renew rental permits, giving the 718 residents until Dec. 31, 2012 to vacate the property. When the swimming pool, community room, bowling alley, meeting rooms, spa and exercise room were closed with the announcement, monthly rent was lowered by $100 to $433. For those who remained past the Dec. 31 deadline, rent increased to $590 and up to $650.

The Tribe compensated low-income, year-round residents to help them move. Those who had an adjusted household income of less than $40,000 per year qualified for grants of $3,000 for relocation of their mobile homes; 195 residents received the grants. Six others in desperate financial straits received larger grants. Ultimately, the Tribe paid about $650,000 in relocation.

“The Tribe did a great job in providing the tools for these people to find and move to new places,” said Joe Martin, real estate director. “Everyone was moved out by June 30. The Florida Mobile Home Relocation Trust [Fund] said this was the fastest a park of that size was ever cleared out. It was because the Council was wise enough to put these measures into place, which saved the Tribe about $1 million.”

Residents had nine months to prepare to move; when the Palma Nova Mobile Home Park in Davie closed in 2008, its residents had only six months to leave. To further assist Seminole Estates residents with relocation, the Tribe reached out to mobile home parks around the state looking for available space.

The Tribe also allowed Lakeshore Communities, a mobile home property company with about 800 available sites around the state, to open an office onsite. The company offered to move residents’ homes to their sites for no charge; they moved about 160 homes with their residents and approximately 200 empty homes. The company is also performing demolition work on the site.