Skip to content
You are here
Home > Community > Howard Tommie honored by Indian health board, inducted into Chilocco Indian School Hall of Fame 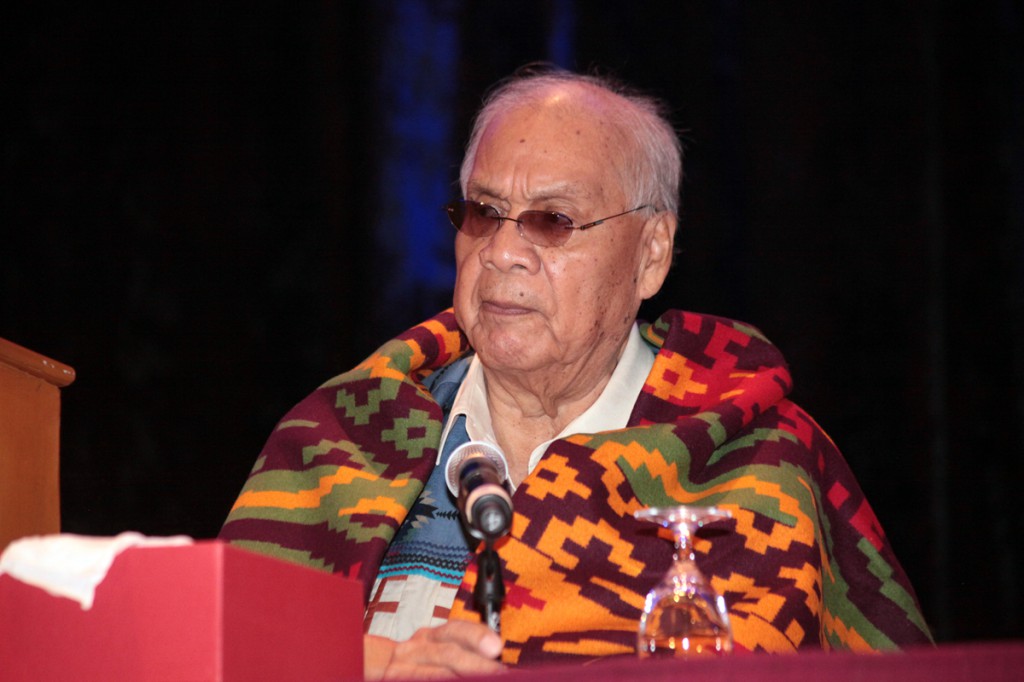 HOLLYWOOD — June was a busy month for former Tribal Chairman Howard Tommie; he was honored with a lifetime of achievement award by the National Indian Health Board (NIHB) and was inducted into the Chilocco Indian School Hall of Fame.

The NIHB aims to strengthen health care for all Native Americans by increasing awareness of Indian health care issues to the federal government and private agencies. The nonprofit organization advocates on behalf of all 566 federally recognized Tribes and plays a major role in focusing attention on Indian health care needs.

The organization honored Tommie during its NIHB Public Health Summit at the Hard Rock Hotel & Casino Hollywood June 17-19. The fourth annual event was a forum to identify the most important public health agendas in Indian Country and bring those ideas to Tribal leaders and the federal government.

About 370 people from Tribes across the U.S. attended.

The organization honored Tommie for a lifetime of achievement in the NIHB, as well as in the Seminole Tribe of Florida.

“They needed people on the board and my interest was in health policy, so it worked out real good for me,” said Tommie, who served as the NIHB chairman in the 1970s. “It was an honor to serve as chairman of NIHB. I guess I opened my mouth too much and asked questions, so they elected me chairman.”

During his tenure, Tommie worked to pass the Indian Child Welfare Act. He is most proud of setting board policies that allowed Tribes to have self-determination to succeed or fail as a Tribe instead of letting the Bureau of Indian Affairs dictate what they can and cannot do.

“In the ’70s we were getting away from bloated federal agencies who weren’t getting service into our communities,” Tommie said. “I feel like we got it down to a local level on the reservations; we had a real good board. We wanted to do our own thing and I’m proud we did that.”

At the time, Tribes were increasing in size but because Congress was unreceptive to funding, the NIHB had to find other resources. Tommie led the organization as they decided to look to the future and find funding outside of the BIA or Indian Health Service allocations. The Seminoles, for example, use gaming revenue to help fund health care costs and clinics for the Tribe.

“We are reclaiming the journey of health that was interrupted in 1492,” said Stacy Bohlen, NIHB executive director. “The summit is a scorecard on the top agendas in public health. The health disparities in Indian Country are worse than in the Third World and it’s vital that funding continues. We have to speak up and act to make sure the programs continue, specifically the diabetes program for Indians.”

Within the ranks of the NIHB, Tommie has a well-known reputation.

“It was so nice to meet Howard; he was so instrumental in getting this organization started,” said Cathy Abramson, NIHB chairwoman. “He feels we are going in the right direction and we value his feedback.”

Before earning those positions, Tommie was a boy growing up on the Brighton Reservation whose parents wanted him to have the best education possible.

In his sophomore year at Okeechobee High School, Tommie went to work for a rancher. That’s when the BIA talked to his parents about sending him away to finish high school to ensure him an education.

“My parents wanted me to finish school,” Tommie said. “In the 1940s, my older brothers and sisters went to boarding school in North Carolina. They sent me to Oklahoma.”

Chilocco Indian School, located on the border of Oklahoma and Kansas, was built in 1884 and closed in 1980. More than 18,000 Native American students attended the school; 5,542 earned a high school diploma. Located on about 8,600 acres of land provided by the Cherokee Tribe, Chilocco began as an agricultural school but evolved into a vocational and high school. In its heyday, the school boasted more than 100 buildings, including a printing press, golf course, gas station, fire station, lumber shed, granary, garages, tennis courts, swimming pool, water tower, dormitories, hospital and National Guard Armory.

Tommie went to Chilocco in 1957 and graduated in 1959. Three other Seminole boys went with him, Henry Gopher, Archie Johns, Sr. and Cecil Johns.

“I went on a trial basis, but the atmosphere was good; I liked it,” said Tommie, who played football, basketball, ran track and learned a trade — engine mechanic — at the school. “It was a treat to intermingle with kids from other Tribes. We knew there were other Indians in other places but never met any.”

To this day, Tommie remains in touch with some of his high school buddies and he even has a home in Shawnee, Okla. He and six other former students were inducted into the Chilocco Hall of Fame on June 1. Mitchell Cypress is the only other Seminole in the Hall of Fame; he was inducted in 2006.

“I had a good time at the ceremony – it was an honor,” he said. “They recognized my leadership in the Tribe.”

Tommie’s leadership and legacy with the Seminole Tribe is easy to identify. Chairman James E. Billie introduced him at the NIHB event.

“For a bunch of people living in the swamp, we’ve had some good leaders,” he said. “We used to hang onto him and traveled with him around the country. He grasped the idea of how we fit into this United States.”

With perspective on a life spent serving his Tribe, Tommie sees the past and future clearly.

“I’m old fashioned; my grandpa told us things will change and you have to change with them,” he said. “I’m proud that we looked ahead. Our forefathers did that by not going to Oklahoma. Our leaders made all these decisions years ago and the ones who come after us will make decisions, too. We adapted to what was coming toward us; we succeeded in thinking ahead and made decisions for the betterment of the Tribe.”