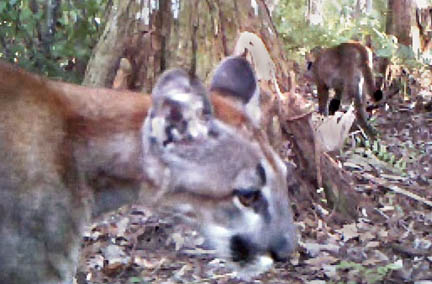 BIG CYPRESS — The Ah-Tah-Thi-Ki Museum installed two wildlife cameras off the boardwalk on Jan. 7 to observe animals that frequent the area. Seventeen days later, a pair of Florida panthers posed for the camera.

The mile-long boardwalk meanders through the 60-acre cypress dome, where Museum visitors learn about the flora and fauna of the area.

“At least one of the photos was triggered at 4:15 on a Saturday afternoon,” operations manager Annette Snapp said. “The cameras aren’t far from the boardwalk; they are probably watching people all the time.”

Because the Ah-Tah-Thi-Ki property is part of an environmental mitigation area, the Environmental Resources Management Department has an interest in documenting wildlife and loaned the cameras to the Museum. Raccoons have also been photographed.

Snapp said she was surprised to see the panthers so quickly because so few live in the wild. The Florida panther has been on the federal endangered species list since 1967. The population has rebounded, from about 30 panthers to an estimated 100-180 today, since the Florida Fish and Wildlife Conservation Commission (FWC) enacted a recovery plan for the cats in the 1980s.

Although the effort to protect and increase Florida’s panther population has been successful, its habitat has decreased dramatically.

Historically panthers lived in the southeastern U.S. from Arkansas to Florida. Today their range is limited to about 4,000 square miles south of the Caloosahatchee River and inland from the coasts, including Big Cypress and Immokalee Reservations, according to the FWC.

Florida panthers are large, solitary and elusive cats seldom seen in the wild. Although panthers have a potential lifespan of up to 12 years in the wild, many are killed each year by other panthers or vehicles. Last year, 24 panthers were killed by vehicles, and 12 were killed from January to March 2015.

Female panthers weigh between 70-100 pounds, while males can weigh 130-160 pounds. Males require about 200 square miles for their home range, which sometimes overlaps with territory belonging to other males, according to the FWC.

The Museum will continue to check the cameras monthly and monitor the four-legged visitors’ presence at the boardwalk.

Monitors in the Museum show footage from the cameras.