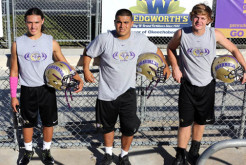 OKEECHOBEE — Seminoles have played prominent roles on the Okeechobee High football team in the past, and this year is no different.

On the same field that used to be home to Garrett Madrigal and Jarrid Smith – two of the program’s all-time greats – other Seminoles including Daniel Nunez Jr. and Drayton Billie have continued a pipeline that Okeechobee head coach Chris Branham appreciates.

“Throughout my history of being here, any of our kids who are Tribal kids I loved coaching them,” Branham said. “There’s a lot of different things you have to juggle with the fact of the distance and time and things that we require of them to be here during the summer, but we’ve never really had any issues with that. I’ve always been proud of them for their dedication and their hard work and the contributions they’ve given to us in this football program.”

Branham was head coach during Madrigal’s career and an assistant coach when Smith played. Madrigal’s name is still atop the school record book as the team’s career leader in passing yards and touchdown passes. Smith played for Okeechobee before he embarked on an outstanding career as an offensive lineman at Florida Atlantic University.

This season Daniel and Drayton and fellow Pemayetv Emahakv Charter School alum Zeke Matthews have been key players for Okeechobee, whose 2-4 record through six games could easily have been reversed considering three of the losses were by a touchdown or less.

Daniel, whose sister Cheyenne is a multisport standout at the school and Jr. Miss Florida Seminole, earned a spot on the varsity squad his freshman year in 2011 and has been a fixture at linebacker and part-time running back ever since.

“On the field, you never have to worry about him giving his best effort,” Branham said. “As far as his attitude and work ethic at practice, he’s a joy to be around. You hate to lose somebody like that who has been around for so long, but it’s been a pleasure to have him with us.”

Daniel is one of eight seniors on the team.

“It’s been a lot of fun. It’s a good time. I’ll probably miss it,” said Daniel, who is eyeing a potential career in the military. “I want to go to the Navy.”

Similar to Daniel, Drayton also made varsity as a freshman.

“Drayton proved that he could handle it, and he got to come up and play running back,” Branham said.

Now in his sophomore season, Daniel, who also wrestles, has seen his work load increase in the team’s deep backfield. He rushed for a season-high 50 yards on eight carries in a 20-14 win against Port St. Lucie Oct. 10.

On a team that doesn’t have much size – excluding 6-foot-3, 410-pound center Edrick Neal – both Daniel and Drayton play bigger than their 5-foot-5 frames.

While Drayton plays mostly on offense and Daniel plays mostly on defense, Zeke plays both as a wide receiver and safety. Filling more than one role isn’t anything new to Zeke, who is also a pitcher and shortstop on the baseball team.

“Zeke is a good all-around athlete,” Branham said. “He plays baseball. He could probably play basketball if he wanted.”

Although he doesn’t see the ball too much as a receiver on a run-oriented offense, the 5-10, 180-pound junior has the tools to haul in whatever comes his way.

“Zeke has probably got the best overall hands, the most reliable hands on the team,” Branham said.

On defense, those hands can be used in the secondary or elsewhere.

“He’s tough enough he can even roll up as a linebacker at times for us,” Branham said.

With Drayton and Zeke among a solid core coming back, next season looks promising for Okeechobee.

“We’re excited about the future,” Branham said. “We only lose eight kids; we’ll return everyone else.”

Part of that excitement about the future includes a trio of Pemayetv Emahakv graduates who could be battling for varsity spots. Sophomores Demetrius Clark and Trevor Thomas and freshman Richard Harris have spent the season on the junior varsity team.

Trevor handled quarterback duties until a broken finger sidelined him.

“They’ve got three quarterbacks. They’re very young and very talented, and Trevor is one of them,” Branham said. “Richard has had a very good season as a defensive end. Demetrius has had a great season as a receiver and a safety. We’re hoping they maintain their grades and get to move up with us and help be impact players over the next couple years.”