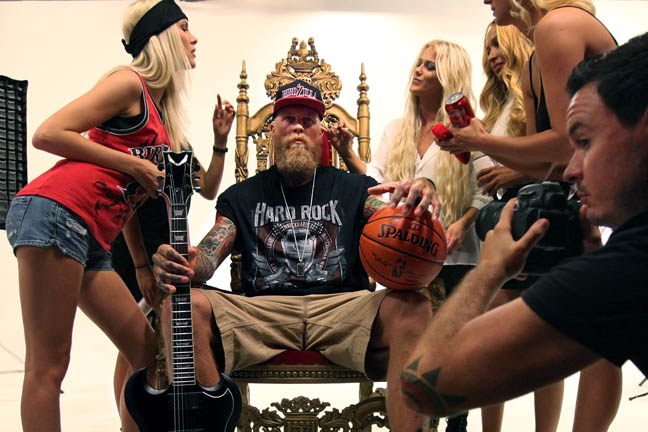 “In basketball, Chris is known as an energy player,” said David Drow, executive director of Enterprise Beverage Group, which produces, distributes and markets the product. “We’re an image and lifestyle brand. Part of that is about being fun, a little crazy and maybe a little off-center. We make things rock harder.”

Though Andersen, 36, is under contract with Seminole Tribe of Florida, Inc., his relationship with the Seminole community will remain “loose and informal,” Drow said. Appearances at Tribal community events are not mandatory, but Andersen is welcome whenever he can attend.

“He is recognized right away and immediately brings interest,” Rep. Frank said. “We see it leading to more business for the product but also for more and better business relationships throughout Florida. It’s a new step for Tribal business.”

Andersen said the relationship is a natural fit.

“I’m very energetic on the court and that rolls into my personal life … You do know I’m wild, right?” he said. “With my image, Hard Rock’s image and the fact that I love all kinds of music, to be part of (Hard Rock Energy) is best for me and the company.”

A fan of the product, Andersen said his home refrigerator is stocked with Hard Rock Energy. The drink comes in three flavors: Original (citrus), Paradise Punch (tropical punch) and Sugar Free (light citrus), but Andersen said he looks forward to helping the company create a flavor of his own.

Though Andersen is an NBA star, his status on the Heat did not slam dunk the deal.

Drow said Andersen, also known as “Birdzilla,” advances Hard Rock Energy because he represents the “craziness and wild side” of the Hard Rock lifestyle.

Andersen’s success is a school of hard knocks story about endurance and determination.

He spent three years of middle school in a group home, never earned the grades for a college basketball scholarship, dropped out of junior college and then played with five semi-pro teams in three years.

In 2001 he signed with the Denver Nuggets, becoming the first D-League player called up by an NBA team. He is tattooed over nearly 75 percent of his body and is developing a reality television show called “Urban Outdoorsman” for men who live and work in the city but rush to nature for weekend camping, fishing, hunting and mudding.

“We take life further. We make everything in life rock harder from music to entertainment to personality to lifestyle to Hard Rock Energy drinks,” Drow said.

Hard Rock Energy, manufactured and canned in Miami, is available in 500 stores throughout South Florida and in 1,200 stores nationwide.