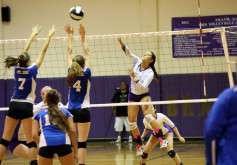 OKEECHOBEE — This summer Cheyenne Nunez arrived in Italy with a volleyball team full of strangers.

“I was the only girl from Florida,” said Cheyenne, who was selected to play for a team comprised of high school players from around the U.S. “I had to meet them and become best friends with them because they were about to become my teammates the next day. That’s a fast learning process.”

Adaptability and affability are ingredients that the new Jr. Miss Florida Seminole brings with her on the volleyball court at Okeechobee High School and in the court of royalty representing the Tribe.

“I think it shows that she is very versatile and she can relate to different groups of girls and people,” said Okeechobee volleyball coach Taylor Pritchard. “I think that’s what’s so cool about her and that’s why so many people love her because she can get along with so many different people.”

Cheyenne is a junior outside hitter for Okeechobee, which won 16 games in the regular season, finished as 6A-District 13 runner-up and qualified for the regional playoffs for the seventh straight year, all amid a season of cohesiveness.

“We’re literally the definition of a team,” Cheyenne said. “We’re best friends on and off the court. The bond is just amazing. I’ve never had a team that has bonded so well together. It’s amazing. I love it.”

It’s tough to find a weakness in Cheyenne’s game. She played the entire match against Sebastian River Oct. 16, displaying the versatility that Pritchard admires by delving into just about every facet, from blocking at the net to receiving in the backcourt to hitting from the outside. On a few occasions, Cheyenne even hurled her body to the court while diving to keep points alive.

“She’s got a great attitude, and she’s constant. Her attitude never falters,” Pritchard said. “She’s not someone who gets down. Even when she’s having an off game, her attitude stays positive. She’s a kid I can scream at and she’s not going to cry about it.”

But ask Cheyenne about saying goodbye at the end of the season to the team’s two seniors – Lexi Ward and Sarah Hurst – and a tear or two is likely to appear.

“I hate talking about it because I’ve been playing with those two seniors since I was like 7 years old,” Cheyenne said. “It’s heartbreaking.”

Lexi and Sarah won’t be back next season, but Cheyenne and her Tribal teammate Odessa King, a sophomore, still have time left on the squad. Similar to Cheyenne, Odessa is an outside hitter and can fill other roles while coming off the bench.

“She also keeps a positive attitude,” Pritchard said. “She’s super respectful. She never gets upset about being on the bench. (Against Sebastian River) we used her as a middle. She’s not usually a middle; she’s usually a left side, but she never complains. She’s always at practice working. She wants to get better. She’s got a great attitude.”

As for Cheyenne’s new role among Tribal royalty alongside her cousin – Miss Florida Seminole Brianna Nunez – Cheyenne admitted that the balancing act with academics, volleyball, basketball, softball, searching for colleges, Tribal functions and everything else that comes with being a high school junior can be overwhelming at times.

“That has been a struggle with me,” she said. “I understand how important it is to hold a title, especially representing my Tribe, and I know I have to hold higher responsibilities for myself, but it’s a struggle because of the sports and my grades and then I have all this going on here and with homecoming.”

Daniel and Peggy Nunez’s daughter keeps things in perspective by keeping up her grades.

Cheyenne’s affection for volleyball was evident this summer thanks to a busy itinerary. She attended volleyball camps at the University of Pennsylvania in Philadelphia, Florida Gulf Coast University in Fort Myers and Florida State, which is where she and Brianna are scheduled to participate in a ceremony at the Seminoles’ homecoming football game in November.

And there was the trip to Italy. The team gathered in a hotel room its first night and became acquainted the old-fashioned way – by talking.

“We became instant sisters,” Cheyenne said. “I still talk to the girls, almost on a daily basis. I never thought in a million years I would become so close to somebody within two weeks.”