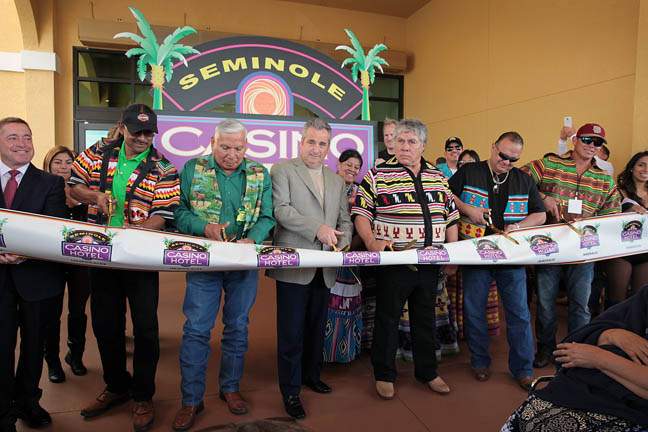 IMMOKALEE — Patrons of the Tribe’s casino in Immokalee now have a good reason to play late into the night: an adjoining 99-room hotel that opened for business March 12.

“This was a dream we all discussed,” said President Tony Sanchez Jr., who worked at the casino – now known as Seminole Casino Hotel Immokalee – for 12 years. “To see this dream come to fruition, I can’t say anything but ‘wow.’ This property is like a diamond; we needed to shine it to bring out its luster and brilliance.”

About 250 people attended the grand opening, including Tribe officials, Tribal members and casino customers. Medicine man Bobby Henry marked the occasion by bestowing a traditional blessing on the property.

“Four years ago, Tony Sanchez thought we could put a hotel here,” Chairman James E. Billie said. “We went with that and we are opening it today.”

The casino and hotel employ 1,000 workers, which benefits the Immokalee economy, said Jim Allen, Seminole Gaming CEO. All together, the Tribe employs 35,000 through various businesses, including Hard Rock International, he said.

“This takes the facility to a whole other level,” Allen said. “It’s as beautiful as anything in Atlantic City or Las Vegas.”

The casino draws customers primarily from Naples, Marco Island and Fort Myers, about 30 miles west of Immokalee. Allen said the added amenities, including the restaurant, event center and hotel rooms, give patrons the opportunity to stay longer and enjoy the facilities.

“We didn’t get here by accident,” Hollywood Councilman Chris Osceola said. “We got here because we have some of the best folks in the world working for us.”

Chairman Billie recalled building the Tribe’s casino business from 1979 to 2000. He credited Allen, who joined the team in 2000, for driving the business to today’s world-renowned level of success.

Seminole Casino Hotel Immokalee general manager Tony Alves, who worked with Allen at The Trump Organization in Atlantic City in the 1980s, pledged to grow the business and offer the best guest services.

The project, which took about a year to complete, was a joint venture of the Tribal Council and Board, with construction by Seminole/Stiles.

“It’s historic any time you bring on a new business for the Tribe,” Brighton Board Rep. Larry Howard said. “This has been a long time coming; we need it here for this casino. When both the Board and Council work together, it’s a win for the Seminole Tribe.”

After the ribbon cutting, guests toured the facility and adjourned to the Seminole Center, which was decorated with historic photos, dramatic ceiling drapes and a centerpiece commemorating the Tribe’s eight clans.

“I was asked if I stay here, and I said no and I probably never will,” Brighton Councilman Andrew J. Bowers Jr. said. “I hope it is full from now on by paying customers.”