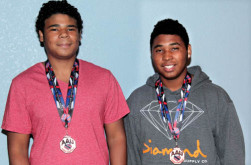 HOLLYWOOD — The Sanchez brothers primarily play football, but their athletic talents expand beyond the gridiron.

Jesse will enter his sophomore year in August, while Samuel will begin his freshman year. The sons of Alicia Cabal and the late Clifford Sanchez spent part of their youth on the Hollywood Reservation before moving to Oklahoma.

Football, wrestling and track keep the brothers busy during the school year, but that doesn’t mean summer break offers any relief. Nearly every day is occupied with football and crossfit workouts that start at dawn and wrestling sessions that conclude in the evening.

“It’s cardio and self-discipline,” said Jesse, who is on the comeback trail after suffering an ankle injury in a football scrimmage last year. The injury kept the tailback on the sidelines for all his sports. Getting back on the mats marked another step in the right direction for Jesse; he returned to the football field in spring and played in Fort Gibson’s annual red-white scrimmage.

As a running back, Samuel also operates out of the backfield. His four years of wrestling experience are twice as much as his older brother. In 2013, Samuel placed sixth in the 161-pound class at Oklahoma’s junior high school state tournament and placed fourth in the Oklahoma Kids Wrestling Association’s state championships.

In the 180-pound class at the First Nations tournament, Samuel competed in a division that included opponents four years older than him. He opened with a loss against a wrestler from Arizona.

“He was stocky and big and strong,” Samuel said. “Because he was so strong, I was trying to use strength against him, but I should have used technical stuff against him.”

But Samuel bounced back. He responded with consecutive wins, including one against the eventual first-place winner.

Although their weights are similar, Samuel and Jesse didn’t wrestle in the same division at First Nations. They’ve only butted heads in a competition once two years ago when Jesse edged Samuel by one point. Samuel, who smiled when saying he let Jesse win, wants a rematch; Jesse said he’s ready.

“He’s kind of taken them under his wing. He’s a really good coach,” said Frank Cabal, the boys’ stepfather.

When the high school football season starts in September, Jesse will likely see most of his playing time on the junior varsity squad and possibly some time with varsity. Samuel will play for the freshman team and could see action on the JV as well.

Although wrestling is big in Oklahoma, football is king, especially in Fort Gibson. The town of 4,000 residents in the northeast corner of the state makes high school football a top priority.

“The whole town goes on Friday nights,” Jesse said. “You see everyone there.”

“I didn’t realize Friday Night Lights was real until we moved to Fort Gibson,” Frank Cabal said. “You drive down a highway on a Friday night and you see all those stadium lights in different towns lit up. It’s all about football.”