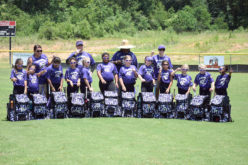 For five girls from the Brighton Reservation, the summer of 2016 won’t soon be forgotten.

Before the girls headed back to school – four of them attend Pemayetv Emahakv Charter School – they joined the rest of their teammates on a memorable journey that began after they were selected to represent their Okeechobee Citizens Recreation Association league following the regular season.

The Seminole Tribe connections extended beyond the players with Preston Baker as the head coach and his wife, Mona, as an assistant coach and president of the OCRA.

“Those little girls played their hearts out,” Preston said. “We practiced hard, at least two or three hours a day, three or four days a week. They’re eager to learn.”

As state champions and World Series runner-up, the team’s accomplishments have led to a bit of fame for the players. The Okeechobee County Board of County Commissioners honored the squad with a proclamation at the commission’s meeting Aug. 25. The team has been invited to participate in the city’s Labor Day parade.

Mona said the entire community stepped up to support the team filled with a dozen girls ages 7 to 9.

“The community support in Okeechobee was overwhelming. Food, gas, lodging, all taken care of through local businesses with donations,” she said.

The Okeechobee Darlings didn’t disappoint their supporters. Hitting and confidence were keys as the team roared through the state tournament undefeated and notched wins in the World Series against host Petal and state champions from Louisiana, North Carolina and Texas.

“The whole lineup could hit,” Preston said. “We didn’t have one weak batter on the team, not one weak player. That was a solid team.”

“It was a great experience,” Mona added. “They were all very confident. All our girls hit. That’s the advantage.”

Solid contact was made by Preston and Mona’s daughter, Preslynn, who blasted the ball out of the park for two home runs in the World Series, the most of any player in the tournament. Both dingers carried extra significance because the first one came when Preslynn was 8 and the second one, after she celebrated a birthday, came when she was 9.

Okeechobee, which was named Florida at the 11-team World Series, generated plenty of other highlights at the plate. The team opened with a 14-0 win against Petal which included an inside-the-park home run from Lason.

In its second game, Florida topped Texas 10-3 behind a 3-run home run from Preslynn, a 3-for-3 performance from Tiyanni and a catch in right field by Merleaysia to end the game.
Florida’s undefeated run ended when they were sent into the losers’ bracket with a 6-3 loss to Tennessee.

Florida bounced back with a 10-7 win against North Carolina. All five Seminoles had multiple-hit games. Lason and Tiyanni scored two runs each.

A 3-1 win against Louisiana set up a rematch for Florida against their nemesis, undefeated Tennessee, in the championship. The teams were knotted at 6-6 after four innings before Tennessee pulled away with an 11-7 win to claim the title. Preslynn ended the tournament on a high note with her second home run. She was awarded the game ball in the championship game. Tiyanni had three hits and Merelysia, Lason and Alyssa each had two hits.

While its offense never slowed down, the team’s defense was also sharp, Preston said. Tiyanni, the leadoff batter, played shortstop with Preslynn next to her at third base. Merelysia, Lason and Alyssa handled outfield duties.

Although they came up just short of winning the World Series, the Okeechobee Darlings learned valuable lessons that should help them throughout their softball careers.

“They played together,” Preston said. “No arguing, no fuss. They were just there to play.”

The team’s success led to the players and parents becoming a close-knit group that celebrated three different birthdays, enjoyed barbeque food and went to the movies.

“We became one big family,” Mona said. “Second of 11 teams is awesome. These girls did a great job. I couldn’t be more proud of them.”