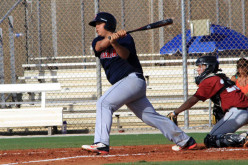 JUPITER — A California youth baseball team won two major tournaments on the East Coast in July, and Seminole Sean Osceola was in the middle of it all.

Osceola’s teammates on Team Phenom don’t live a couple houses or streets or towns from his family’s home on the Brighton Reservation.

For the past few years, Osceola has played for Team Phenom, often joining the club at tournaments in Arizona, California, Nevada and other western venues and on its occasional journeys to the East. Although a Florida teen playing for a travel team on the other side of the country is rare, Osceola has made it a perfect fit in more ways than one.

Comprised of 14- to 15-year-olds, the club is based in Moreno Valley, about an hour’s drive east of Los Angeles. Most of the players are from western states; Osceola is an exception who has done exceptionally well in Joe Keller’s program.

“To me, as a character, as a person, he’s unbelievable as a person,” said Keller, Phenom’s founder and coach who first noticed Osceola during a tournament in Florida several years ago. “Talent, he’s one of the strongest 14-year-olds I’ve ever seen. He plays the game the right way. It’s been an honor to have him in our program.”

Osceola – a 6-foot-1, 225-pound right-handed power pitcher, first baseman and clean-up hitter – will be a high school freshman this fall. Home-schooled as an eighth-grader, the son of Reno and Kelli Osceola was still considering where he’ll attend high school when Team Phenom captured USA Baseball’s National 15U East Championship in mid-July at Roger Dean Stadium in Jupiter.

The tournament featured 36 teams. In addition to two California teams, the array of out-of-state license plates in the parking lot during one session – Louisiana, Maryland, North Carolina, Rhode Island, Virginia – served as geographic proof of the tournament’s broad reach.

Pitching at the spring training home for the Miami Marlins and St. Louis Cardinals, Osceola delivered a four-hit gem in the championship game, a 3-0 win against Palm Beach County PAL. He registered eight strikeouts in five and one-third scoreless innings to notch the victory against a club that had racked up double-digit runs four times in the tournament.

Osceola didn’t allow any walks and helped his own cause at the plate with an RBI single and a walk.

An impressive performance by Osceola in a clutch game is no surprise to Keller.

“He’s a guy that will play in the big games,” Keller said following a game early in the tournament. “He’s the kind of guy that will step up and want to play in those situations. He strives for that.”

Osceola, who recently turned 15, had plenty of other highlights in the tournament, as Team Phenom posted a 7-1 record. He went 3-for-3 with three RBIs in a 7-3 win against Palm Beach Select. The following game he drove in the winning run in extra innings with an opposite field single into the gap.

“I was just looking for a fastball away that I could hit hard and give my team a chance to win,” Osceola said.

Team Phenom’s title run in Jupiter came on the heels of the club winning USA Baseball’s 14U Cup in North Carolina. Osceola cranked out a mammoth home run in the semifinals.

“He hit a ball out of the stadium at USA Baseball that I don’t think ever came down,” Keller said.

“It got us up early in the semifinal game. It gave us confidence,” Team Phenom catcher Austin Wells said.

Wells has been Osceola’s battery mate for the past few years.

“He’s a phenomenal pitcher,” said Wells, who is heading into this freshman year at Bishop Gorman High School in Las Vegas. “He throws pretty hard. He’s got a nice off-speed and hits his spots real good.”

Playing for Team Phenom has hit the spot for Osceola.

“The West Coast has a lot of competition for baseball. It’s good competition. I get to face good pitchers and it makes me a better player,” Osceola said.

During a game in Jupiter, Osceola handled designated hitter duties. He drew two walks and sprinted to first base both times. Between innings, he stayed active by bringing bats, gloves and helmets to his teammates. Those protocols are emphasized in Team Phenom’s program.

“(Coach Keller) has always taught us that coaches and scouts look for the little things players do, not just performance, but how you act as an individual, picking up your players. I just try to do little things to help out my teammates,” Osceola said.

“He’s definitely one of the top players in the nation for sure,” Keller said. “I’ve been doing this for 24 years. He definitely has a shot to do something. It just depends on how much he continues to grow and continues to love the game and have the right guidance.”

As for Major Leaguers, Osceola said he admires Cardinals ace Adam Wainwright “because he goes after (batters) and his confidence level is high” and Detroit Tigers star Miguel Cabrera.

“He can hit for power, he can hit for doubles and everything,” Osceola said. “He’s good at placing the ball. He’s a smart hitter.”