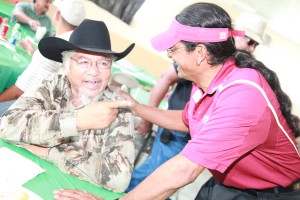 BIG CYPRESS — Rudy “The Legend” Osceola decided to put his work aside in retirement.

With 38 years of service to his people – mostly in the Big Cypress Cattle and Range Department – the longtime rancher/herdsmen/cattle operator had a lasting impact on many people within the Tribe.

Big Cypress Tribal Council Rep. Mondo Tiger, who said he worked for the retiree when he was 12 years old, recalled a time when Osceola operated a bull project on the Big Cypress Reservation in the 1970s and 1980s.

“Rudy used to raise a whole bunch of bulls,” Rep. Tiger said. “He has taught a lot of us younger guys how to rope and ride on cattle. He has a whole lot of influence on all of us. We go way back.”

Rep. Tiger said he considers Osceola a role model among the scores of Tribal individuals he has dealt with over the course of his life.

“A lot of us copied guys like Rudy and Jonah Cypress in how we live our lives,” Rep. Tiger said. “Those two are the best of friends that ever was. To me, it’s very sad to see Rudy retire, but when you come to the end of your road, you know it’s your time.”

Fellow Tribal citizen Moses “Big Shot” Jumper, who recited a poem in honor of Osceola, talked about some of the moments he has shared with the retiree.

“A lot of people don’t know this, but Rudy has a very good sports background,” Jumper said of the 2011 Seminole Tribe Sports Hall of Fame inductee. “He wasn’t just good in basketball and track. He was also known for being a great rodeo competitor. As far back I can remember, we used to get together on our horses and tend to our cattle a lot. We have a lot of history together.”

“Rudy’s not going to stop,” Buster said. “He’s going to keep on going.”

The longtime cattleman confirmed that notion, as he stated that he plans to do some side work with the Big Cypress Councilman’s Office in the near future. In his spare time, Osceola said he will spend more time with his wife, Lisa, his grandchildren and all his friends.