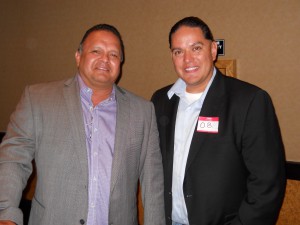 NAPLES — Like his grandfather and father before him, everyone seems to know Seminole entrepreneur O.B. Osceola Jr. From the pool players at the Flamingo Pool Hall in St. Petersburg who can’t wait for his next visit and the impromptu 9-ball tourney that always ensues, to the folks at the Daytona International Speedway who brought O.B.’s 13-year-old daughter Tori on stage to sing the National Anthem at the last Daytona 500, to Washington, D.C. where he heads a construction project two blocks from the Capitol, to Hard Rock Casinos and ABC Liquor Stores everywhere that stock their shelves with his own personal vodka. Yes, everyone knows O.B. Osceola Jr.

In some circles he is known as an insurance executive, specializing in Native American indemnity. In other circles he is known as NASCAR’s first Native American stock car owner. He has been known as president of Pro Investment Group International and as Chief Executive Officer of Pro Games LLC. A former Tribal leader and Mr. Seminole, this pool player, proud father, big contract construction manager, spirits capitalist, national insurance man, gaming mogul and professional racecar magnate is a veritable Seminole Mr. Versatility.

“It’s all just business,” laughed the perpetually smiling, 43-year-old Naples native. “It might seem like a really diverse portfolio, but they are all businesses. They require vision, creativity, planning and hard work. That’s been around me all my life. I grew up in a family of entrepreneurs and hard workers.”

His grandfather, the late Corey Osceola, was a well-known Tribal leader of the 30s-50s, whose missing arm (alligator) made him a familiar icon to millions of Americans enthralled with his stubborn refusals to cooperate with the U.S. government and his considerable entrepreneurial spirit. As an interpreter for Mikasuki speakers who could not speak English, he assisted many Seminole people in business startups and ran his own tourist villages in several parts of Florida.

Corey’s son, O.B. Osceola Sr., 77, is a prominent Naples community resident and, for 50 years, has maintained a world-renowned chickee-building crew whose palmetto-thatched structures cover Florida, the Southeast and the Caribbean.

“I was raised right here in Naples, went to Catholic school and had a lot of good mentors,” said O.B. Jr., whose family were independent Seminoles until joining the Tribe in 1984. “I listened to my grandfather. I watched my dad. I saw how he made his living working with his hands AND his mind. You have to have a good mind when you are in construction. It was great motivation to see my father operate his business. Watching and working with him, that’s how I learned business. One thing I really admired is, all those years, my dad had the same crew. He took care of his good workers.”

For seven years, O.B. Jr. served as Tribal liaison to the Naples community. “I really learned a lot as liaison. Essentially, I learned how the Tribe works,” he recalled. “Then I started to see opportunity. I started learning how to take an idea to fruition. I’ve always liked a challenge. That’s what business does for me. It’s a challenge.”

“I just didn’t want to be one direction. I wanted to break new ground. Like (Tribal Chairman) James Billie. He used to tell me how exciting it was to go where no one else has been. He inspired me. I feel as if I am breaking new ground in the footsteps he first laid out.”

When South Florida entrepreneur Bob Germain joined forces with O.B. Jr. earlier this year, creating Germain-Osceola Racing, new NASCAR ground was broken. The pair worked out a deal to share sponsorship with GEICO and handle the full sponsorship of 10 races in the 2012 season. The first race for the No. 13 Sprint Cup Toyota, under the Germain-Osceola banner, will be next February at the Daytona 500. “We have the driver – Casey Mears – and are working on the sponsorships now,” said O.B. Jr., who plans to sell sponsorships to American Indian Tribes, particularly gaming tribes. “A lot of Tribes are interested, including the Chickasaws in Oklahoma. Nike is also interested.”

“I have a big vision for our Tribes,” O.B. Jr. told Naples News, last month. “I wanted to be somewhat of a pioneer. The opportunity came where I realized there was no Native American owners in NASCAR, so that became a goal of mine. It inspired me to get involved with Bob.”

Prominent racing site CatchFence.com reported that O. B. Osceola Jr. has been “instrumental in constructing and managing a number of large-scale projects for the Seminole Tribe of Florida, including fundraising and construction for Florida’s Immokalee Casino and overseeing the Tribe’s ownership of the Hard Rock and Hollywood Hotel/Casino franchises.”

O.B.’s vodka idea, however, caught the interest of Seminole Hard Rock Gaming CEO Jim Allen. “I’ve always wanted to get into the spirits business. It seemed to me there was a lot of opportunity there,” O.B. Jr. said, holding up a new bottle of Hard Rock Vodka with the distinctive Hard Rock guitar brand etched into the glass. “I was there when the Tribe bought the Hard Rock brand. I watched it all transpire. I thought, this is a lifestyle brand. Even my grandfather knew about Elvis; he knew it was rock and roll. It was a lifestyle brand, transgenerational. I thought, ‘Why not create a spirit for this?’”

“I made it through the Hard Rock intellectual design battle – they are very particular about how they represent the brand,” said O.B. Jr., who signed up Southern Wine and Spirits to handle the distribution. “They are the New York Yankees of spirits distribution.”

The vodka, itself, is imported from England, bottled by LiDestri Spirits of Rochester, N.Y. and “available right now all over Florida. By year one, we will be in 15 states; in year two, we’ll pick up 25 more; and by year three, we will be everywhere,” added the young entrepreneur, who had a star-studded grand launching of the product in September at Bongos at the Hard Rock Paradise.

A chance meeting on an airplane (flying to a NASCAR race) with insurance executive Carl Pittman last year also led to the creation of what is now called Osceola Group Insurance Inc. “He leaned over and asked me if I was Seminole. We started to talk about insurance,” O.B. Jr. said. “I don’t like to talk too long, though. I like to do it.”

Only a few weeks later, O.B. Jr. found himself as the overseer and manager of the new company’s acquisition and expansion of business underwriting services throughout North America, marshalling a staff of agents and management licensed in all 50 states. “Nowadays, there is a strong Native-to-Native business initiative out there. We plan to take advantage of that,” said O.B. Jr., who points out that the National Indian Gaming Association (NIGA) has officially endorsed Osceola Group Insurance Inc. as a preferred carrier for American Indian Tribes. “Every tribe needs insurance,” he said. “Whatever they need, we can handle it.”

Speaking of NIGA, the countrywide Indian gaming clearinghouse needed an expansion of its Washington, D.C. headquarters and put out a Request for Bids. Guess who came in with the low bid and high marks for quality assurance?

Talako Construction LLC, a Native American owned general contractor and construction management firm located in Naples. “We got in with the NIGA officials. They want to promote Native businesses. We bid and came in lower. So we are going to add an auditorium, conference center, garden area and redo the NIGA parking lot,” said O.B. Jr., who joined with the existing Cleveland Construction Inc. to form Talako in 2010. “We just signed a $1.5 million Lincoln-Mercury renovation right here in Naples, and we bid on a casino project in Baltimore. We are on target to bring in $25 million in projects over the next year, looking for a lot of them right here in Indian Country.”

“Every business model I’ve done was specifically designed NOT to just run to the Tribe,” said Seminole’s Mr. Versatility. “I didn’t want to be a burden to my own Tribe. I wanted to do what I could independently. I wanted to break new ground.”