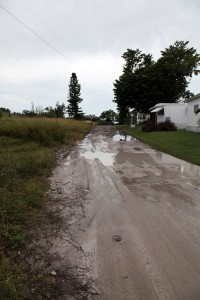 CHOKOLOSKEE — Mamie Street is back.

A thin gray stretch of mud, pothole, standing water and stone now provide access to the Ted Smallwood Store and Museum at the extreme southwestern tip of Florida. The access – more of a path than a road – was provided by Florida Georgia Grove LLC (FGG), the Highland County development outfit that removed the road six months ago in a failed attempt to strongarm state, federal and Collier County agencies.

Judge Hugh Hayes ordered the road replaced after a hearing in which he declared Mamie Street – the only access road to the historic 106-year-old Store – existed as a “prescriptive easement,” maintained by the county for public use and not a private road owned by the developers.

The current “access” was finished right on Oct. 15 – the deadline set by Judge Hayes. “What they have created is unacceptable,” said attorney Rachael Loukenon, who filed a motion asking Judge Hayes to intervene. “The Judge told them to put the road back the way it was when they took it out. This is nothing like the former Mamie Street.”

Mamie Street, named for Collier pioneer and Store founder Ted Smallwood’s wife, is the oldest road on the island, the largest in the Ten Thousand Islands chain. “Mamie Street was paved. This is not. You could fit two cars, side by side on the old Mamie Street. This one barely fits one. It’s a joke,” said a beleaguered Lynn Smallwood-McMillin, who manages her grandfather’s old Store. “Tour buses can’t make it to the Store. We have a lot of people drive up, take one look at the road and they turn around. People are afraid to take their cars on it.”

FGG surprised county officials earlier in October by filing a motion demanding Judge Hayes remove himself from the case, accusing him of acting partial to county issues since the Collier Courthouse Annex building is named for him. Collier County partnered with the Smallwood Store in demanding the access be restored. At press time, the Judge had not yet ruled on FGG’s motion.

For further updates on the Smallwood Store issue, check out The Seminole Tribune’s Facebook site at https://www.facebook.com/#!/pages/The-Seminole-Tribune/214507311940029.