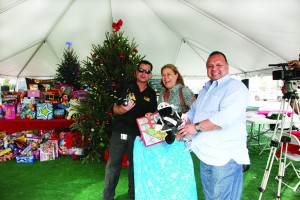 HOLLYWOOD — If you listened to almost any local radio station on Dec. 12, you would have heard all about the annual Holiday Toy Drive in Hollywood sponsored by the Seminole Tribe and President Tony Sanchez Jr.

Held in a large open tent a stone’s throw from the historic Council Oak tree and surrounded by a fleet of Mobile Mike’s vehicles, the Toy Drive attracted people all day and into the night. They came bearing gifts: new unwrapped toys so disadvantaged children could experience a merry Christmas. Donated toys – more than 25,000 – were so plentiful they spilled off tables onto the carpeted floor of the tent, which was decorated with two large Christmas trees.

The toys were donated to the Native Relief Foundation, Toys for Tots and Big Mama’s Team of Life charities.

“This is a time to be thankful for family and friends, but we also want to help the less fortunate,” President Sanchez said. “If we can make a few people happy, we hope to accomplish that.”

Mobile Mike, of Mobile Mike Media Group, a joint venture with the Board of Directors, announced the event repeatedly on all South Florida Clear Channel radio stations and successfully persuaded people to contribute to the Toy Drive.

“We want to make sure every child has a toy under their tree on Christmas,” said Mobile Mike, who has hosted the Toy Drive with the Tribe for eight years. “We’ve gotten more toys earlier in the day this year than last; we usually don’t start getting a lot of people until 4 or 5 p.m. It’s a sign the economy is improving.”

The Seminole Hard Rock Hotel & Casino also contributed to the drive in a big way. A truck loaded with about $5,000 worth of toys purchased by the hotel pulled up to the site, where numerous volunteers unloaded the treasures and added them to the already crowded tables.

The hotels in Hollywood and Tampa, as well as the casinos in Brighton, Immokalee and the Classic in Hollywood, contributed to the effort.

“We sent out elf teams,” said Phil Madow, president of Seminole Hard Rock Hotel & Casino. “Six teams were dispatched to Target, Toys R Us and Kmart all around town.”

Carlene Osceola, an assistant from Hollywood Councilman Marcellus W. Osceola Jr.’s office, came by with an SUV filled with toy guitars for boys and girls.

A stream of people including Tribal members and local residents also gave heartily. Some stayed for lunch, compliments of Renegade Barbeque Co.

“It makes me feel good inside and in my heart,” Tribal member Patrick Doctor Sr. said. “When I was growing up, I had nothing like this. I didn’t have toys, so I want to give children a chance to remember good times.”