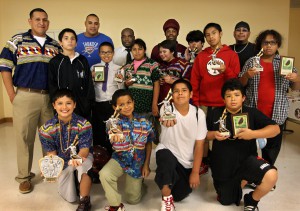 BIG CYPRESS — For some kids, football is a pigskin tossed, caught and run into the end zone during a game watched on television.

For 12 boys and one girl from the Big Cypress Reservation, who played their first season on the gridiron last fall as BC Seminoles, football was more about education and teamwork than tackles and touchdowns.

Coaches Kelvin Robinson and Carlton Banks, both Clewiston High School football alumni, started teaching the BC Seminoles 12 and under team from scratch. Many of the children had ideas about how the game is played, but few knew the very basics.

“We had to go on the field with them to show them how to line up,” Robinson said.

“Team sports, especially football, take the greatest commitment from players. But the coaches thought out of the box,” said Recreation director Richard Blankenship during the team’s end-of-season banquet and awards ceremony on Dec. 13. “Having a new team with not a lot of kids didn’t stop them for going out there and being a team.”

Big Cypress Recreation site manager Josh Jumper offered a prayer of thanks over the barbecue pork and chicken dinner then credited team members for a good season played valiantly.

“It was a great experience,” Jumper told the team. “It helped you all become better men and, for one of you, a better woman.”

Charli Frye, the only girl to play, won the team’s Above and Beyond award. Jumper said Frye epitomized the phrase “girl power.”

“I saw Charli get hit hard, then get up and give it back. She’s one of the hardest hitters on the team,” Jumper said.

Frye said she was considered an equal on the field.

“Everyone who knows me knows that I can play sports with boys,” she said. “The hardest part to learn was blocking. The easiest was hitting and running the calls.”

Team member Cordell Baxter, who won a Most Improved Player award with teammate Leviticus Buster, said memorizing game plays and reading the coaches’ hand signals were the hardest parts of learning the game.

“But it was really cool. I was a football fan already. Now, I’m really looking forward to next year,” Baxter said.

Although they didn’t win a game, they came close to scoring touchdowns – twice, Robinson said.

Still, Jumper said, all the team members are winners.

“We never want this just to be about a football game,” he said. “We hope children learn the game of life.”