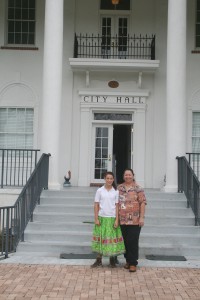 EVERGLADES CITY — Acting as ambassadors of the Seminole Tribe, Mary Jene Koenes and her granddaughter, Dayra, wowed an audience of 68 participants in their Greater Naples Leadership (GNL) history day session on Oct. 19.

The group met in the conference room of Everglades City Hall. Listed on the national registry of historical sites, the structure was originally built as the first Collier County Court House in the 1920s and stands within a few miles of many traditional Seminole campsites and the Smallwood Trading Post. It provided the perfect setting for a brief glance at the Native American influence on South Florida and the impact of Seminole history in the region.

In its 16th year, GNL acquaints new Florida residents, who are interested in volunteering their skills to nonprofit organizations, with a basic knowledge of the community in which they plan to serve. Hoping they will apply their leadership skills, talents and experience to assist programs in Collier County, GNL focuses on history, culture, communication, health care, education, environment, growth, human services, government and law.

Having recently purchased retirement or second homes in Florida, the audience learned during the introduction that they weren’t the first immigrants to the area. The Florida peninsula has been home to Native Americans since archaic times and for centuries, it was the winter hunting grounds of the ancestors of the Seminole Tribe who originated in the southeastern region of North America.

Attempted domination by the European cultures forced the Seminole forefathers to emigrate southward from their permanent settlements as early as the late 1600s. Continued pressure by encroaching settlers and the Indian Removal Act of the 1800s resulted in three Seminole Wars and eventual withdrawal by survivors to isolation deep within the Everglades. The Seminole ancestors paid for their right to a Florida existence with their blood.

Dayra Koenes immediately captivated her audience by reciting the Manteele and then turned the floor over to her grandmother, Mary Jene, who addressed the gathering in Mikasuki during brief opening remarks. Acquainting the assembly with Seminole culture, she next supplied a background of Tribal history that covered the past 150 years in South Florida.

The majority of the group was surprised to learn that the region had remained an untamed frontier of natural resources inhabited, almost exclusively, by Seminoles until the past 85 years. With the arrival of speculators and developers, the area has been transformed forever.

Koenes also explored the transition of the Seminole economy and gradual evolution of the Tribal government with its sovereign status and constitution. Observing that their economy is more than casinos, she discussed their agricultural contributions, cattle industry, citrus, sugarcane and Hard Rock enterprises.

During a question and answer sessions, the Koenes women both fielded inquiries focused on education, youth and recreation programs, health care, citizenship, environmental concerns, cultural preservation and natural resources. Many of the participants expressed their astonishment when they learned that the Tribal members are self-sufficient, pay income taxes and are proud veterans and supporters of the U.S. Military.

“We may not have had money, but we were never poor,” said Mary Jene Koenes. “The Seminoles have always been some of the richest people on Earth because of their heritage, culture, family traditions and love. We are devoting our energy into preserving and promoting these principles for our future generations. This will ensure our continued survival in an ever-changing world.”