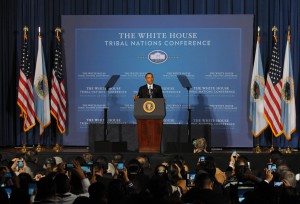 “It’s very important that we show up in D.C.,” President Sanchez said. “We always need to have that presence.”

Obama hosted the conference for the fourth consecutive year, continuing his 2008 election campaign promise to improve and expand dialog with Indian Country and prompting one Tribal leader to playfully introduce him as “the first American Indian president.” The conference convened at the Department of Interior headquarters.

“Now three years ago, I was proud to see that this conference was the largest gathering of Tribal leaders in our history,” Obama told the crowd. “And back then, an event like this was rare. It’s gotten routine.”

The overall message resounded throughout the day: the U.S. government has come a long way in its relations with Indian Country, but there’s more to do. Tribal members voiced their concerns, and cabinet members expressed their desires to help.

“Just as America is going through a process of trying to deal with the economy, the unemployment, getting people more educated, those are the same issues [Native Americans] are dealing with,” President Sanchez said. “We all have the same concerns, just on various degrees.”

The day kicked off with a presentation of colors by the Native American Women Warriors, accompanied by representatives of the Navajo Code Talkers, including Peter MacDonald Sr., friend of the Seminole Tribe.

After a flag song and invocation, U.S. secretaries made opening remarks, representing the departments of Interior, Education, Treasury, Commerce, Health and Human Services, and Agriculture.

A midday breakout session divided Tribal leaders into five groups, giving Tribes an opportunity to help shape federal policy. President Sanchez attended the session on Healthcare, Education and Youth. He said diabetes gravely concerns the Tribe, and he wanted to learn how other Tribes not only treat but also prevent such health issues.

“I want to understand what Tribes are doing across the nation,” President Sanchez said. “We don’t always need to reinvent the wheel…There are a lot of Tribes that are focusing on health in many aspects.”

President Sanchez hopes to grow a closer partnership among the Tribe’s Recreation and Health departments in the near future as a means of preventative health care.

“Recreation and Health need to be joined at the hip,” he said. “We don’t want to have to rely on medication.”

“He’s a great resource,” President Sanchez said of the Chairman, whom he previously consulted about solar energy.

The other breakout sessions discussed the following topics: Governance and the Nation-to-Nation Relationship; Law Enforcement and Disaster Relief; Economic Development, Housing and Infrastructure; and Cultural Protection, Natural Resources and the Environment.

The President networked with several other officials at the conference, including Department of Energy staff regarding the Tribe’s move toward solar energy and Secretary of the Interior Ken Salazar.

Although he didn’t get to speak with Obama at this year’s conference, President Sanchez met him on three previous occasions and plans to attend Obama’s inauguration.

“I think he has done a good job in enforcing the executive order that the federal government has consultation with the Tribe,” President Sanchez said.

However, he would like to see more consultation with Tribes before enacting legislation that would affect Indian Country.

Also during the conference, Deputy Secretary of the Treasury Neal Wolin announced new proposals laying out broad exclusions of certain benefits from income that Indian Tribal governments provide to Tribal members; Tribes have developed programs to address their unique social, cultural and economic issues, and the new guidelines seek to provide certainty on what benefits fall under the general welfare exclusion from income.

“It’s a win for Tribes across the country,” President Sanchez said.

Closing comments came from secretaries of Transportation and Labor, and Obama capped off the conference with his address, highlighting his administration’s strides with Indian Country.

“We focused on justice and Tribal sovereignty,” Obama said. “Longstanding legal disputes like the Cobell case have been resolved. I signed into law the Tribal Law and Order Act, which is helping to fight crime. These are all important steps, but we’ve got more work to do.”

Obama said he hopes to continue improving Tribes’ economies and quelling domestic violence. He asked federal officials to support small Tribal businesses and to improve federal protection of sacred sites, on which a report was released Dec. 6.

“We’re going to keep working together to make sure that the promise of America is fully realized for every Native American,” Obama said.