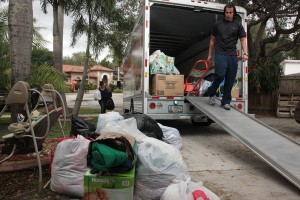 It’s hard to imagine living below the federal poverty line of $23,050 per year for a family of four. But on the Pine Ridge Reservation in South Dakota, some families struggle to survive on $3,800 per year.

In October 2011, a few Seminole Tribal members watched an ABC News documentary about the reservation from the comfort of their own homes and started texting and emailing each other immediately. Something had to be done.

“We were all touched emotionally; we were crying,” Gloria Wilson said. “We knew we had to get together as a group and do something to help. And that’s what we did.”

The Native Relief Foundation (NRF) was created in November 2011 with the objective to provide assistance to non-gaming Tribes. In only its second year, the nonprofit organization completed three separate relief efforts for Pine Ridge this month. They delivered a truckload of goods to the reservation, including clothing, baby items, warm coats and jackets, non-perishable food and toys to various districts on the reservation; sent clothing and school supplies to students at Flandreau Indian School; and purchased new toys for students at the Wounded Knee School. Most of the items were donated by Tribal members or purchased by the foundation.

NRF member Bobbi “BJ” Billie drove the 20-foot truck to South Dakota along with NRF member Pete Osceola and Misha Winters, a Rosebud Sioux member from Pine Ridge. After a 36-hour drive, they spent a week delivering items to four of the nine districts on the reservation, which is larger than Delaware.

“There are so many communities up there who need help,” said Billie, one of the founders of NRF, who lived in Pine Ridge for 12 years. “I’ve seen how they live firsthand. I don’t know how to express it, but it means a lot to me to give up family time to do this.”

The NRF is not funded by the Tribe, so it holds a variety of fundraisers throughout the year, including yard sales, raffles and collections through donation boxes on every reservation in which people have donated a large variety of items.

“The kids up there don’t often have shoes without holes in them,” NRF member Jody Osceola said. “This is poverty I don’t think anyone in the Seminole Tribe can even grasp. There are no business prospects in Pine Ridge, and the land is barren and harsh. They rely on help from the government. It’s really sad that in America in 2012 this kind of poverty exists.”

• The 3,469-square-mile reservation is the poorest in the U.S. and is home to a population estimated at 40,000 people of various Sioux Tribes.

•It is the eighth-largest reservation in the country.

•Only 84,000 acres out of the reservation’s 2.2 million are suitable for agriculture.

•Unemployment is between 80-85 percent; 49 percent of the population live below the poverty level.

•There is little economic industry.

•It has the highest infant mortality rate in the U.S.

•Many families have no electricity most of the year and no telephone service, running water or sewers.

•Life expectancy is 48 years for men and 52 years for women, the lowest anywhere in the western hemisphere, except for Haiti.

“The drinking water isn’t always safe, the youth centers are run down, the housing and community facilities are dilapidated,” Wilson said. “We wanted to provide direct service to the people and make sure it goes to a lot of places on the reservation.”

“We have been collecting clothing for the school since 2006; it’s a year-round effort,” said Bowers, also an NRF member. “We send them as soon as the boxes get filled up. As long as the clothes are clean, we will accept anything. We’ve sent everything from prom dresses to pencils. They really appreciate the donations.”

Last year, they bought generic gifts for different ages. This year, they knew what the students wanted. Fifth- and eighth-graders requested radios. The shoppers found dark-haired Barbie and Monster High dolls, but most of the Disney princesses were blondes. Regardless, they filled baskets with the dolls, popular action figures, games, Legos and other non-battery operated items.

“Our focus is on the children,” said Gama, an NRF committee member. “We want to give them a Christmas they will remember.”

The NRF is in the application process for a federal 501(c)3 nonprofit designation, which should be finalized in the next few months. When that occurs, the organization will be able to solicit for and accept cash donations, as well as donations and merchandise from corporations.

“Just a handful of people conceived this and are now implementing it,” Wilson said.

To get involved in the Native Relief Foundation or to donate goods for the holidays, email GloriaWilson2@semtribe.com, WBowers@semtribe.com or Jody@osceolaoperations.com.