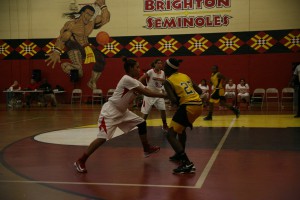 BRIGHTON — The Pemayetv Emahakv Charter School (PECS) basketball season came to an end on Jan. 17 at the Brighton Gymnasium.

Both the boys’ and girls’ basketball teams played against Yearling Middle School at home to complete the season.

With losing only a couple games last year by a few points, including losses to Sebastian and Yearling middle schools by two points each, the Lady Seminoles head coach Tim Thomas said he knew the girls could go undefeated if they worked on a few things.

“I know we had a couple of games slip away at the free-throw line,” Thomas said. “(This year) we basically just worked on free throws a lot at practice, and we worked on pressing to get turnovers to get easier baskets.”

“If we go hard, make turnovers and easy baskets, we can be successful,” he said.

The only obstacle in the Lady Seminoles’ schedule that could have kept them from going undefeated was the game on Nov. 29 against Ahfachkee.

“Ahfachkee was one of the games that I was worried about (because) we were going to be playing 8-minute quarters and playing high school girls when we were used to playing 6 minutes,” Thomas said.

However, with the help of leading player Shae Pierce and the team’s determination, the length of the game and the age of their opponents proved irrelevant. The Lady Seminoles won 55-45.

For PECS boys’ basketball head coach Ryan Tedders, this year has been the most rewarding.

Tedders contributes the successful season to the team’s athleticism and ability to work together.

“We had a good group of athletes. We were able to work hard and work together,” Tedders said. “In the past, I wasn’t able to sub as much.”

Despite losing their first game of the season against Yearling Middle School, the boys quickly regrouped, winning their next six games starting with the win against Lake Placid (35-28) on Nov. 26.

The boys’ second loss of the season came on Dec. 12 against Osceola Middle with a score of 29-36.

“It was just an off night for the team as a whole, and Osceola came ready to play, Tedders said. “It was a game we shouldn’t have lost.”

The Seminoles finished the second half of the season at home with a 4-1 record, including wins against Clewiston, Ahfachkee, Glades Day and Osceola Middle.

“The second time when Osceola came to our gym, we stepped it up winning 49-19,” Tedders said.

He attributes the win to the tremendous amount of teamwork and effort put forth by the team.

“They were more focused and determined,” he said.

For Tedders, the most memorable games were played against Ahfachkee.

“They are really physical and an impressive team,” he said. “They fought us all the way to the end and you could see the effort on the court going back and forth.”

Although the team lost their last home game to Yearling Middle School, they showed improvement from the first game played against them.

“It means a lot to me to work with them throughout the season and to see their improvement and success,” Tedders said. “It will be fun to watch them play again next year.”