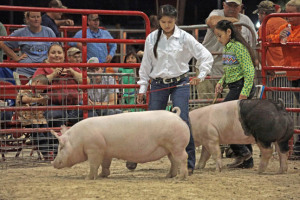 WEST PALM BEACH — Seminole 4-H’ers from Brighton, Big Cypress and Immokalee showed brute determination Jan. 23 at the South Florida Fair hog show. The West Palm Beach event, open to all youth in the region, allowed kids to compete with peers outside the Tribe.

“It’s good for them to see what the competition is like, mingle, get to know the other kids and compete with the outside world,” said Polly Hayes, 4-H coordinator.

The sound of hogs oinking, snorting and squealing filled the Agriplex at the South Florida Fairgrounds as kids prepared for the show ring by washing, brushing and clipping their animals.

Harmony Cypress, 10, was showing a hog for the third time.

“She’s a really good pig,” Harmony said. “When I lead her, she will just follow. But she can be a little feisty at times. Sometimes when I’m walking her, she stops at other pigs’ pens to eat. I’m looking forward to what her reaction will be in the ring.”

Before the show, just for fun, Harmony and Jaylee Wilcox, both of Big Cypress Reservation, quizzed each other on hog anatomy and recited each part like experts.

“I hope to do better this year,” said Jaylee, who showed a hog for the second time. “It’s hard to teach him not to go where he wants to go but to go where I want him to.”

The 4-H’ers received 3-month-old pigs in September and October and spent the next 100 days feeding, exercising and caring for them. They tracked expenses for supplies and veterinarian visits in a record book, and some children said it helped their math grades improve in school.

The day after the show, the animals were sold for what the kids hoped would be a profit. Tribal Council and Board members purchased the hogs, and Hayes said the Tribe always supports the youth. Most of the Seminole 4-H’ers, however, said the sale was the hardest part.

“It’s sad to sell it,” said Ezekiel Roberts, 13, who has raised a hog for three consecutive years. “4-H teaches you that it’s a business. It gets easier each year, but it’s still hard.”

Despite the outcome of the project, the kids sometimes grow attached to their animals.

“I’m going to miss her,” Harmony said. “All she has to look forward to in life is getting chopped up and eaten. But I gave her a good life; I always go over and hug her.”

Vanessa Aguilar, of Immokalee, has three children in 4-H – Ezekiel, Caniah Billie and Cartaya Billie. She said taking care of the animals was a family activity they did every day after school.

“We spend a lot of time and money, but it teaches them responsibility, gives them something to stay motivated and keeps them busy,” Aguilar said. “Everybody does their part; their father [Pete Aguilar] does the feed runs.”

During the show, the hogs were divided into weight groups of about 10 per group. Rosalinda Lopez, who has spent the last six years in 4-H, placed third in her group. It was the last time she would show at the South Florida Fair.

“I liked the experience and getting to know everybody,” said Rosalinda, 18, of Immokalee. “It taught me organizational skills, but the hardest thing was getting attached to every single animal. It gets sad at the auction, but being paid for the effort is good.”

It takes a lot of effort to complete the project and kids spend a lot of time with the animals.

“I loved spending time with my pig every day,” Caniah Billie, 11, said. “I learned that as much time as you spend is as much as they will listen to you. But he’s stubborn and sometimes doesn’t listen.”

Rosalinda, who has juggled 4-H, school and sports for six years, has advice for kids who are thinking about joining 4-H.

“Do it, follow through and don’t give up,” she said. “Sometimes you want to quit because of how many responsibilities you have, but you get a reward at the end.”

The Seminole Indian 4-H Livestock Show and Sale will be held in Brighton March 27-28; the weigh-in is March 26.