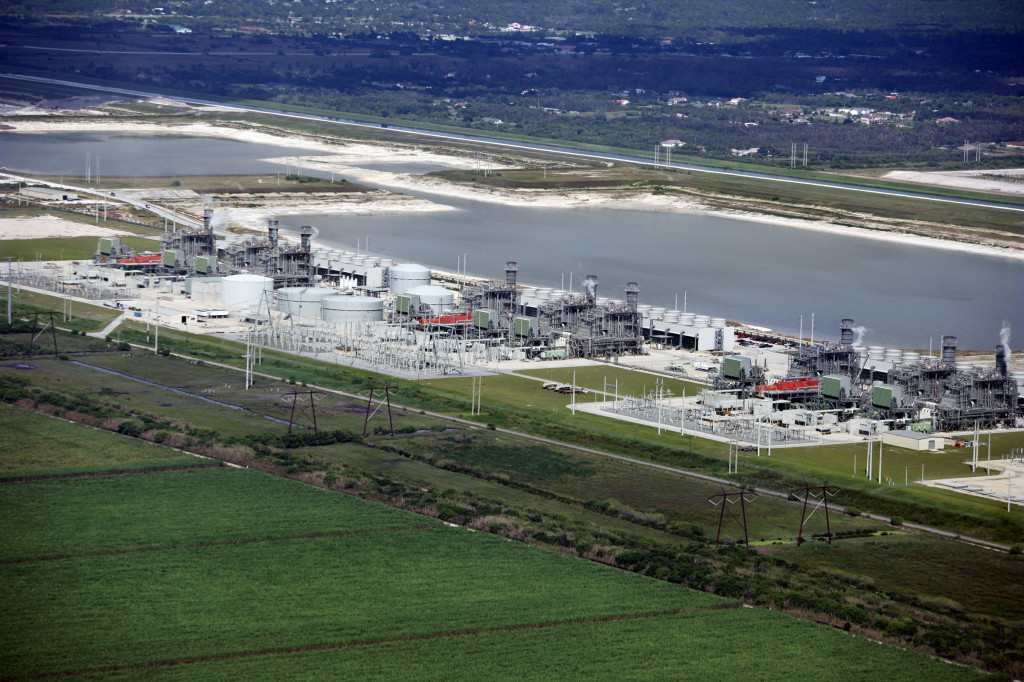 BIG CYPRESS — Cruising north on State Road 880 along stretches of pastoral farmland, a mammoth lineup of gray metal and smokestacks loom at the horizon 20 miles away. From 15 miles, the air takes on an unfamiliar stink that lingers and contradicts the bucolic breadth of cattle pastures, vegetable fields and blue sky.

At the destination, the 220-acre Florida Power & Light Co. (FPL) West County Energy Center in Palm Beach County drew gasps from nearly 30 Tribal members who saw for themselves the monstrous example of what FPL wants to build next door to the Big Cypress Reservation.

The cavalcade organized by Big Cypress Councilman Mondo Tiger provided an up-close view of what could likely sit on 3,200 acres of non-Tribal land about a mile from the planned campus of Ahfachkee High School on County Road 833, otherwise known as Josie Billie Highway.

Some Tribal members stared with disbelief at the Palm Beach facility’s spread. The project at Big Cypress – in the middle of proven habitat for the endangered Florida panther, wood stork, eastern indigo snake and crested caracara – is proposed to be a duplicate.

The plant will require the use of 22 million gallons of water per day pumped from the underground Tamiami Aquifer, a primary source of water for all of Hendry County.

“They want to put all of this right there at our reservation?” Claudia Doctor asked.  But she already knew the answer.

Doctor was among dozens of Tribal members who were informed about the project during a community meeting held days earlier at the Big Cypress Senior Center.

“We’ve been two years in litigation over the rezoning of the property,” said Andrew Bauman, a lawyer with Lewis, Longman & Walker law firm, at the meeting. “If it goes in their favor, FPL will build (near Big Cypress) the largest natural gas plant in Florida and one of the largest in the United States.”

The Hendry County Commission voted in 2011 to change the zoning of the property, then a cattle ranch, from agricultural to Planned Unit Development (PUD) at the request of owner and developer Eddie Garcia, of Virginia Beach, Va.

PUD generally describes a mixed use of compatible development, such as residences, businesses, recreation and industry.

After the county changed the zoning, Garcia sold the land called McDaniel Reserve to FPL.

The Tribe subsequently sued the county to reverse the rezoning on grounds that the proposed FPL plant site is not compatible with the area’s sensitive ecologic needs, the centuries-old cultural and historic lifestyle of the Tribe – which is the neighboring community – or the county’s own land use guidelines.

“We’re saying that the zoning must be consistent with the county’s land use plan – it is not,” Bauman said. “The laws are there to ensure that uses can exist next to each other without destroying each other.”

Josie Billie Highway is the only route heading in and out of the reservation through the heart of the rural town. The sight, sound and smell of the power plant will be an unavoidable daily assault to the rural nature of the area steeped in Seminole history and culture.

“Already we know that the lack of water out here has already affected medicinal plants. If the plant is built, we will not even be able to see stars in the night sky,” Bauman said.

The County Commission won the first legal battle on claims that plans were consistent with the Florida Electrical Power Plant Siting Act. However, the application for a power plant had never been submitted.

In June 2013, the Tribe won an appeal to hear the case for a second time. The trial is set for January 2014, but Bauman and the law firm’s managing partner Stephen Walker are gearing up now to prepare for battle.

During the community meeting, Bauman and Walker advised that Tribal members will be needed as witnesses to testify in court that their culture, history and the delicate balance of surrounding nature would be negatively affected.

Archaeological sites that could hold artifacts and possible burial grounds have also been identified on or near the site.

“FPL is preparing applications now to go before the state from environmental permits on fish, wildlife, water and air issues. While we’re fighting against it, they will be working on permits,” Bauman said.

According to FPL’s Ten Year Power Plant Site Plan, all of southeast Florida is habitat for the Florida panther but “no adverse impacts on federal- or state-listed terrestrial plants and animals” will occur due to the sprawling plant. Further, FPL  “anticipates minimizing of mitigating for unavoidable wildlife or wetland impacts” and maintains that the construction and operation of a solar or gas-fired facility is not expected to have any negative effect on parks, recreation areas or environmentally sensitive lands.

However, in a letter to McDaniel Reserve Realty Holdings in May 2011, the Department of Interior Fish and Wildlife Service warned that the site was “known to provide foraging habitat” for the threatened caracara and that all but 6 acres of the massive site are in the primary zone of the agency’s Panther Focus Area. In addition, four colonies of wood stork were documented on the land.

Several environmental groups are expected to stand up with the Tribe against the power plant. Supporters include the Sierra Club, the Conservancy of Southwest Florida, the South Florida Wildlands Association and, according to Councilman Tiger, Broward powerhouse Ron Bergeron, an engineering contractor and self-described “Gladesman” who has served on the Florida Fish and Wildlife Conservation Commission since 2007.

Bauman said the legal team is working on gathering expert witnesses, such as a hydrologist, wildlife expert, air quality scientists and economists. But Bauman and Councilman Tiger urged Tribal members to testify in their own words about what would be lost to the Tribe’s cultural and traditional daily life if the plant were built – medicinal plants, wildlife, ceremonial  grounds, archeological sites and tourism business would all be disrupted.

“We have to stop it. Just say, ‘No we don’t want it and here is why’ . . .  The fight is to get them out of here,” said Frank Billie Jr., of Big Cypress Council Compliance.

“No matter where we live, the FPL problem is a Tribal problem. It’s all of our business,” Bowers said.