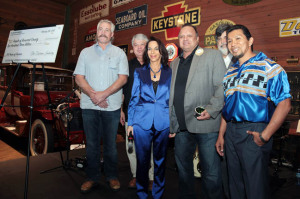 FORT LAUDERDALE — The Seminole Tribe of Florida, along with 13 other members of the Broward County hospitality industry, was inducted into TravelHost of Greater Fort Lauderdale’s Tourism Hall of Fame Feb. 5 during a reception celebrating the magazine’s 35th anniversary.

“The Seminoles were here in the beginning,” Lee said. “We stand on their shoulders. As they have grown and developed, they have transformed the destination. They are our heritage.”

President Tony Sanchez Jr. accepted the honor on behalf of the Tribe.

“Who would have thought that when we started high stakes bingo in 1979, Seminole Gaming would evolve into what it is today,” he said. “And the ride isn’t over yet.”

“This is a good day for the Tribe,” Allen said. “Seminole Gaming is also having its 35-year anniversary.”

Tommie recognized the impact gaming has had on the Tribe.

“As a Tribal member, it’s a high privilege and honor to be recognized in this capacity,” he said. “[Chairman James E. Billie] is the first one who started this lucrative business; we are fortunate to have him. It’s been good for us and for our infrastructure; it’s been very positive.”