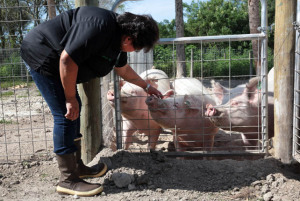 BRIGHTON — High-pitched squeals enveloped ranch hands Jennifer Fish and Kenny Vickers recently as they inoculated each of the roughly 75 hogs at the Seminole Hog Farm in Brighton with a deworming shot.

The older, more experienced hogs, the ones used for breeding, took their shots in stride with nary an oink of protest. It was just another February morning on the farm.

In existence since 1973, the Seminole Hog Farm supplies hogs to 4-H’ers for their project animals, the Culture Department for teaching Pemayetv Emahakv Charter School students how to slaughter and butcher, and Tribal members for traditional uses when necessary. The rest are either sent to market or used for breeding.

“We are learning as we go,” Hayes said. “We know what to look for in a good breeding sow and how to evaluate the structure of the pigs.”

John Wayne Huff Sr. started the farm with only 10 hogs to serve as a food bank for elders and to provide traditional uses for Tribe members. 4-H took over operations in 2010 with about 30 hogs, most of which were old sows. Hayes said she evaluated the farm and brought in 52 better-quality animals from a breeder in Okeechobee. Last August, they brought in registered animals from Illinois to further increase the quality.

The young pigs currently at the farm are the first offspring of the Illinois hogs, which arrived on the reservation already bred. About 100 piglets were sold to the 4-H’ers in the fall.

“They have better genetics than the old ones from Okeechobee,” Fish said. “These are much easier to breed and turn out better babies. The babies will have good litters, too.”

The Illinois progeny have better structure as well. The pigs are judged at the farm the same way as they are in a hog show and sale. The best are kept for breeding; Fish looks for flat backs, plump hind ends and good stances.

Pigs can breed twice a year; the gestation period is three months, three weeks and three days, Vickers said. Babies are weaned at six weeks and sent to market when they reach about 145 pounds around 4 or 5 months old.

On inoculation day, the hogs were also weighed.

A pregnant Yorkshire weighed in at 579 pounds, and although Fish doesn’t know how many will be in the litter, she will raise the piglets.

“When they are babies you can teach them,” Fish said. “I teach them to go back to their pens. They are smart, just like dogs. You get attached to them.”

Daily tasks on the farm include maintaining pens and shelters, ensuring health through routine veterinary exams, and providing clean water and food.

Hayes aims to sell hogs at market and provide animals for outside buyers to eventually become a self-sustaining farm. After a hog from the farm placed in the top five at the South Florida Fair last year, Hayes said she has sold more Seminole hogs to non-Tribal 4-H’ers.

“We are expanding and plan on growing even bigger,” Fish said. “We are doing the best we can to make the hog farm the best it has ever been. I love this job; it’s a lot of work, but I wouldn’t have it any other way.”