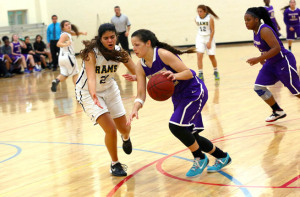 HOLLYWOOD — Shae Pierce didn’t waste any time this season getting acclimated to her new team.

When she drained 27 points in her first game with the Hollywood Christian School girls basketball team in mid-November, it was just the start to a remarkable season for the sophomore point guard who helped turn the squad around. Shae led the team several categories, including points, assists and steals. One year after winning three games, Hollywood Christian went 19-8 this season.

“She’s the reason we are where we are right now,” Hollywood Christian coach Joseph Hernandez said.

On her way to averaging 24.4 points, Shae scored in double digits in all but one of her 23 games. Five times she scored at least 30 points.

Shae’s most productive outing came Dec. 6 when she scored 42 points in a 66-56 win against Highlands Christian, a quality 3A team that won 17 games this year and reached the regional playoffs.

“They’re a physical team and they always try to discourage you,” Shae said. “I like when people get inside my head because it makes me play better.”

Shae’s impressive year extended beyond the regular season. She scored 28 points in a district semifinal win against David Posnack Jewish Day School and registered 18 points in the district championship win against Sheridan Hills Christian. She opened regionals Feb. 5 with a 24-point effort in a 53-49 win against Zion Lutheran and ended her season with 22 points in a regional semifinal loss against Grandview Prep on Feb. 10.

As potent as Shae was on offense, she also was a threat on defense where she averaged more than seven steals per game.

Shae, whose older brother Trewston is a basketball standout at Fort Lauderdale High, wasn’t the only Pierce who excelled this season on the court for Hollywood Christian. Her younger sister Burgundy didn’t play like a typical seventh-grader on the varsity level. She led the squad in rebounds (8.5 per game) and blocks, was second in assists and steals, and third in scoring (10.6).

“If you compare her stats to most girls in seventh grade around Broward County, she’s got to be one of the top two or three players in the county for her age,” Hernandez said.

Burgundy reached the 20-point plateau in two games. She notched nine double-doubles in points and rebounds. With five years of varsity eligibility left, time is on Burgundy’s side.

With a roster void of seniors and juniors this season, the team won’t be hurt by graduation. The experience gained this season could launch the team forward next year.

“Overall we did good,” Shae said. “We have a lot of potential on the bench. Everybody can get better. I think we have a strong future.”