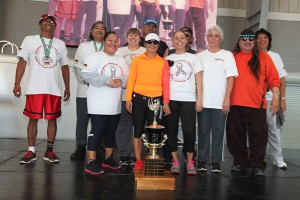 BIG CYPRESS — For the second time in three years, the home team has come out on top.

Team Big Cypress enjoyed their victory at the 12th annual Rez Rally on Jan. 21 with sunny skies and plenty of smiling faces. The team garnered 273 registered participants in the Tribe’s top health competition – an astonishing 42 percent of the 643 total participants Tribalwide.

“It surprised me that we got that many to participate in the Rez Rally,” former Tribal Chairman Mitchell Cypress said. “I thought we were going to get a little bit over 100 people to be here, but it showed how serious everyone was about winning this year. A lot of us wanted to get first, second and third place in the races. It looks like all our training for this paid off.”

Team Big Cypress, which won its fifth Rez Rally overall and its first since 2008, led all reservations with 36 total race winners. Team Hollywood/Fort Pierce/Trail had 32 winners; Team Brighton/Tampa had 20 winners; and Team Immokalee/Naples had seven winners.

“We worked hard, which is what it takes to win,” said Big Cypress Wellness Coordinator Edna McDuffie. “We tried to talk to people and tell them that it’s for their health. I’m glad that we got a lot of participation, and I hope we could continue this journey.”

Big Cypress team captain Cathy Cypress said many of the participants took steps toward their health long before race day.

“We had a lot of seniors walking and biking every day prior to the race,” Cypress said. “There were a lot of kids who also came out to the gym and worked out. We were able to get a whole lot of people excited about exercising. All of that was encouraging to see.”

Regardless of the results, Seminole Health Director Connie Whidden said that everyone who participated in this year’s Rez Rally had a reason to feel proud.

“You are committed to your health,” Whidden said to the Rez Rally participants prior to the races. “We started it 12 years ago to give our community members support and strength in our fight against diabetes and other diseases.”

Tribal minister Paul Buster, who delivered the invocation for this year’s Rez Rally, offered some words of encouragement to all the participants.

“It’s not about who’s the fastest or the strongest. It’s about those who endure to the end,” Buster said. “I hope you all do that with the strength of God.”

Following remarks by Tribal leaders, the Tribe’s Fitness Department led a stretching session. Then it was on to the 3.1- mile race course.

“Together, we can manage diabetes,” Whidden said. “That’s our theme every year and we’re sticking to it.”

Team Hollywood/Fort Pierce/Trail will host the 13th annual Rez Rally, which is tentatively scheduled to take place at Markham Park in Weston.