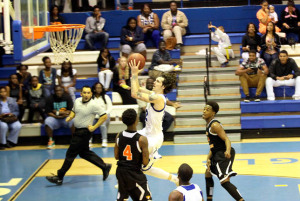 FORT LAUDERDALE — The impressive numbers Trewston Pierce generated this season on the basketball court at Fort Lauderdale High – such as the 34 points he scored in his final game – didn’t tell the entire story as to how much the Flying L ascended as a senior.

“Trewston has grown to be a phenomenal kid,” Belton said. “His biggest growth was in little things, like body language and how to communicate with his teammates. Talent has never been an issue.”

That talent was on display Feb. 6 in Fort Lauderdale’s 68-56 season-ending loss to Boyd Anderson in a Class 7A-District 14 semifinal. Pierce’s night featured a bevy of running jumpers, fingertip layups and baseline victories that kept his team close in front of its home crowd. He beat opponents with tenacious efforts amid traffic under the hoop and eluded them with athletic moves farther out.

With 16 seconds left in the game, a substitute replaced Pierce, who had played every minute. Pierce spent the final ticks on the sideline in a group hug with Belton and teammates James Gardner and Martell Robinson.

Pierce’s first and only season at Fort Lauderdale proved memorable.

“It was wonderful. I can’t ask for more,” he said.

Switching schools and playing with new teammates for only one season can be challenging, but Belton said Pierce earned respect from the team.

“Trewston is so competitive that he expects everyone to play at his level of intensity, and it’s hard because people aren’t as blessed as him,” said Belton, whose team finished 10-10. “So, him getting comfortable with his teammates and having them understand that it’s coming from a good place meant the most.”

Having grown up in the college basketball hotbed of Chapel Hill, North Carolina, Belton knows what it takes to reach the Division I level, which is where he believes Pierce can play.

“The kid has a bright future,” Belton said. “I played with a number of kids who were blessed enough to go on and play Division I college basketball. I think he has everything it takes.”

Pierce, who would likely be a point guard or shooting guard in college, is keeping his options open. If he doesn’t play college ball next season, he said he could spend a year at prep school as a postgraduate before starting his college career.

Regardless of his next stop, Pierce has plenty of gratitude for Belton.

“I can’t thank him enough,” said Pierce, who added his game improved while working with Belton. “Coach Rich did a lot of close moves with me and worked on my fadeaway and a lot of stuff that will help in college.”

Examples of how Pierce can quickly change the course of a game came in the first quarter of the district semifinal. Boyd Anderson led 7-0, but it took only a couple minutes for Pierce to put Fort Lauderdale ahead. He scored eight straight points to give the Flying L’s an 8-7 lead. He finished with 10 points in the quarter.

In the second quarter, Pierce showcased his array of skills at both ends. He caused opponents to foul him twice in one trip and won a 1-on-1 baseline battle for a hard-earned layup on another. He also drained a 3-pointer and notched the first of his three blocks on the night.

Early in the third quarter, Pierce shrugged off three consecutive missed shots and came back with a layup. He kept attacking, so much so that he took eight foul shots in less than three minutes.

Pierce’s game-high 34 points were four shy of his season-high 38 in an overtime win against Monarch in mid-December.

The growth Belton witnessed in Pierce came not only as a person but also as a player. Pierce, the team’s leader in points, scored in double figures nearly every game. Belton said Pierce averaged about 21.6 points per game.

“I think he became a better ball handler than people expected,” Belton said. “I think he’s been used to kind of playing off the ball and being an athlete that can jump. He proved that he can take you off the bounce and he can post you up and things of that nature.”

Fort Lauderdale’s final game wasn’t the last high school game for Pierce. He is among top players from South Florida selected to play in the Tournament of Champions Dade vs. Broward All-Star Game at the Coral Springs Sportsplex in March.

“I’m excited for him to be able to showcase his talent and do it at a high level,” Belton said.