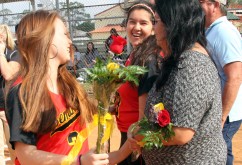 BRIGHTON — As she brushed dirt off her red and black Pemayetv Emahakv Charter School softball uniform one final time, Camryn Thomas managed to smile while she jogged back to the dugout.

The eighth-grader had just been tagged out in the sixth inning while diving headfirst into second base. Her team was losing. Yet Thomas’ grin served as a symbolic gesture to the theme of an upbeat evening for the Lady Seminoles on their annual parent night.

Despite a season-ending 8-6 setback against Okeechobee High’s junior varsity April 10 at Ollie Jones Memorial Park, the PECS middle school program, which finished with a 5-3 record, had plenty of reasons to enjoy its finale while peeking ahead to an optimistic future.

Pregame festivities helped set a festive tone. Thomas and Sunni Bearden – the team’s only eighth-graders – received a send-off as they prepare to embark on their high school careers. Thomas will attend Lake Placid; Bearden will head to Moore Haven.

Starting from second base, Thomas and Bearden were joined by their parents for a brief stroll through the pitcher’s circle as teammates lined both sides. First-year head coach Nancy Jimmie and her assistants Kevin Jackson and McKenzie Green handled greeting duties as the players were presented flowers upon arrival at home plate.

Two years ago, Thomas and Bearden debuted with PECS in memorable fashion on an undefeated squad coached by Darryl Allen. This season turned out to be somewhat of a rebuilding year with several young players after the team lost eight eighth-graders in 2013.

As the team’s primary pitcher, Thomas pitched the first four and one-third innings in her final start. Highlights for the right-hander came in the first and fourth innings when she retired the sides in order, requiring just seven pitches for the latter.

Throughout the season, Thomas has been reliable in the circle and at first base, where she finished the game after being relieved by Aleina Micco.

“Camryn is a big part of the team. She throws hard,” Jimmie said.

An injury kept Bearden out of action for most of the season, including the finale, but she had a prime view from the bench of what next year’s squad will look like.

“They’ve gotten so much better since the beginning. They’re doing real good,” she said about the younger players.

With only one soon-to-be graduate in the lineup, PECS received strong performances from its future.  Led by catcher Alaina Sweat (2-for-2, walk, RBI), all nine starters reached base at least once. Micco delivered an RBI single in the first inning that gave PECS a 1-0 lead.

Thomas, outfielders Jacee Jumper and Krysta Burton and infielders Julia Smith, Chynna Villarreal and Luzana Venzor each had one single.

Leadoff batter Janessa Nunez sparked a three-run third. After being hit by a pitch, Nunez eventually scored to knot the game at 2-2. Jumper crossed home plate to make it 3-2 before Sweat tacked on another run with an RBI single.

PECS’ aspirations to finish with a victory were spoiled when Okeechobee scored six runs in the fifth, which included an RBI triple from D’Anna Wilson.

Although Sweat and Villarreal scored on wild pitches to trim the deficit to two in the sixth, the Lady Seminoles’ rally fell short.

Facing teams with older players – such as Okeechobee’s JV – was nothing new to PECS. In fact, when the Lady Seminoles played Everglades City’s varsity earlier in the season, Jimmie was amazed to see opposing players arrive at the field as drivers, not passengers.

“I remember their pitcher drove up in a big, old pink and black Chevy truck,” she said.

Despite the age gap, PECS wasn’t intimidated. The Lady Seminoles nearly won, but Everglades City emerged with a one-run victory.

“It’s all right,” Thomas said about playing against older teams. “At least it’s competition. It was pretty cool. You get to experience what it’s going to be like when you get older.”

Starting next season, PECS will have to experience what it’s like without Thomas and Bearden. Jimmie said the team’s hard work this season – which included two wins against Morningside and one each against St. Anastasia and JV teams from Glades Day and Clewiston – bodes well for 2015.

“They worked their butt off for me,” she said. “They’re all unique. I do love them all.”