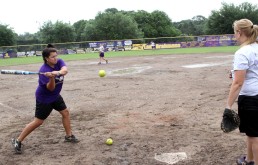 OKEECHOBEE — While the trees beyond the outfield fence fought back against fierce wind, sporadic light rain pelted the girls who practiced on a muddy infield during a gray afternoon. Despite gloomy conditions, Okeechobee High School’s softball coach declared it a glorious time to be on a ball field.

“It’s a great day for softball,” Mary Huff told her players as she hit ground balls to them April 8.

Then again, just about any day is a great day for softball in Huff’s world. The enthusiasm she developed for the sport as a youngster in Brighton and accompanied her throughout her playing days for Okeechobee and in college hasn’t dwindled as a young rookie varsity coach at 23.

“I’m kind of intense and I’m really passionate about the game, and they learned that really quickly,” said Huff, whose inaugural year at the helm of her alma mater ended April 16 with a heartbreaking 6-5 loss against South Fork in a Class 6A-District 13 semifinal. Okeechobee, which finished the regular season in a three-way tie for first place with South Fork and Jensen Beach, compiled a 15-9 record.

Huff’s affection for softball extends beyond practices, games and records. A teary-eyed example of how much the coach cares about her players came in the regular season finale April 7 when she oversaw her first senior night ceremony as a coach. No doubt the seven players from the class of 2014 have earned a special place in Huff’s heart.

When some of those seniors were youngsters, such as leadoff batter Carissa LiCata, they watched Huff as a player on the same field.

“When we were in seventh and eighth grade we’d come out here and watch, but we never expected her to be our coach. She was a really good pitcher,” said LiCata, the team’s speedy spark plug who signed with Florida Gulf Coast University in Fort Myers.

“I saw her play in high school,” added sophomore third baseman Cheyenne Nunez, part of the team’s contingent from Brighton that includes Breanna Billie, Brianna Nunez and Delaney Osceola. “I’d watch the varsity play and I’d say, ‘Dang, those girls are so good. I want to be out there one day.’ I told myself that I’m going to work my butt off and I’m going to be just like Mary. Mary is a heck of a good ball player. She’s definitely a role model.”

Although Huff went away to play college ball, her presence never departed the field after the second team All-State selection graduated in 2008. Her name adorns a sign in center field for the 2007 team that reached the Class 4A state semifinals, the furthest Okeechobee has ever gone. A neighboring sign in right-center from Huff and her parents, John and Vickey, wishes the team best of luck.

In some ways, it’s like old times at Okeechobee High. Huff’s parents attend every game, just like they did when their daughter was a player.

Last summer Huff earned a degree in health and social behavioral sciences and a minor in coaching from the University of Central Florida. She was a member of UCF’s softball team, but an ACL injury prevented her from ever appearing in a game. Prior to her arrival in Orlando, Huff played for St. Petersburg College and Indian River State College in Fort Pierce. Her playing days haven’t finished yet.

She plays slow-pitch for area travel teams and plans to keep playing as long as she can.

“I will always be like that. When I’m playing 40-and-over, I’ll probably be breaking a hip out there,” she said.

Even before starting college, Huff figured she would return as a coach at Okeechobee, where the electronic scoreboard purchased by the Seminole Tribe during Huff’s sophomore year still stands with the Tribe’s name in large letters atop it.

“There’s something about this field and the lights and everything, I just knew I was going to come back one day and (coach),” she said.

After serving as Okeechobee’s junior varsity coach in 2013, Huff earned the promotion to varsity skipper, becoming the program’s third coach in the past four years. She plans to stay much longer than just one season.

“I definitely want to be here, and I will be here until they make me leave. I love it so much,” she said.

Intense preseason conditioning and practices served as immediate proof that Huff wanted her players to step up their game, not only physically, but also mentally.

“I would say this year practices have been tougher, probably the toughest we’ve had,” LiCata said. “She’s definitely been a really good coach. She’s very dedicated to the game. She’s really into helping us get better as a team. She wanted us to be more like a unit rather than separate players, which is good.”

Breaking in her coaching system and philosophy has been a significant part of Huff’s first year. She has tried to make her players anticipate, think and understand situations more than they have in the past.

“Anytime she sees someone do something wrong she helps them right away, with their swings or in the field,” said senior shortstop Stormy Stokes, who plans to play at Indian River State College. “She definitely always has good advice and good pointers that have improved a lot of us.”

“She can be your coach one second and then the next second be your best friend that you can tell anything to,” Cheyenne Nunez said. “She knows when to be serious, (but) she can have fun. She’s not a coach that is totally strict all the time. She has a little bubbly side.”

As for that senior night, Okeechobee topped rival Moore Haven, 15-7, but the result isn’t the only thing that will be remembered. It was a special evening for the Nunez cousins. During the ceremony, Cheyenne brought a farewell gift basket to her older cousin Brianna, a senior left fielder.

“When I had to take my basket out to her, I told myself that I’m not going to cry, but then I went out there and bawled like a baby,” Cheyenne said. “We’ve grown up together and played volleyball together this past year. It’s really heartbreaking to see her leave.”

Although Brianna’s high school career has concluded, Cheyenne, who hit her third home run of the season on senior night, still has two years left.

“Cheyenne is definitely a big contributor,” Huff said. “She’s like me; she’s really intense. I love having her out there.”

When Okeechobee’s previous coach left after last season, players were naturally concerned who would lead them. Cheyenne’s apprehension evaporated as soon as she found out Huff was the new coach.