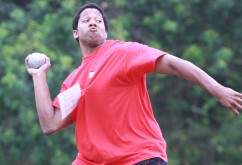 BIG CYPRESS — The significance of the inaugural Big Cypress Track and Field Invitational extended beyond first-place finishes and medals.

Some competitors opted to tackle activities and distances they had never done prior to the March 29 meet on the Big Cypress rodeo grounds.

“It’s probably the farthest I’ve run. It was pretty fun,” said Franklin Jumper, 13, moments after the Ahfachkee School student sprinted to the finish line to win his age group in the 1-mile run on a dirt road across the street from the Junior Cypress Rodeo Arena.

Spanning the athletic spectrum from a 5-mile run to a 5-foot golf putt, the Invitational featured 15 events and about 50 participants comprised of Tribal members, descendants and community members. Ages ranged from single digits into the 70s.

“I’m just trying to get the young and old to come out and exercise and have better fitness,” said Big Cypress Councilman Mondo Tiger, who not only sponsored the meet but also competed in it, winning five events in his 51-54 age group. “Something like this used to be around a long time ago – probably in the 1970s – so I’m just trying to bring it back. Hopefully, we’ll get a bigger turnout next year.”

A handful of events were offered solely to the dozen competitors ages 55 and older, including Big Cypress Board Rep. Joe Frank, who won the men’s archery competition ahead of Sandy Billie Jr. (second) and Rudy Osceola (third).

The Invitational provided an opportunity for Ollie Balentine to do things she had never tried  before, like fling a skillet into the air, maneuver an adult tricycle through an obstacle course dotted with orange cones, and putt a golf ball on an artificial practice green.

“It’s my first time. I had a good time,” said Balentine, who won the skillet toss in the 71-and-older age group.

Time is something that seldom garners the attention of Issiah Billie, 28, during his daily jogs on Big Cypress.

“I run just to run. I never run for time,” Billie said.

This time Billie’s runs were timed as he ran faster than anyone in any age group in the 5-mile (38 minutes, 24 seconds), 2-mile (14:28) and 1-mile (6:37) races. After winning the longest race of the day in the morning, he spent the last 200 yards in the 2-miler glancing over his left shoulder to gauge his lead.

“I had to. Everybody said they want to beat me,” said Billie, whose headphones were tuned to music from Kanye West throughout his 8 miles of running.

The 5-mile run was one of six first-place finishes in the 46-50 age group for Norman “Skeeter” Bowers, who also won the 1-mile and 2-mile runs, shot put, softball throw and standing broad jump. Bowers’ impressive day earned him the Most Valuable Athlete award from the Recreation Department.

Multiple-event winner Heather Peterson was the only female to complete the 5-mile run. She did so in 39:38.

Tricycle races and golf putting for the 55-and-older contingent were the only events held indoors. Nearly all the golf participants had never played the sport, so the advice and instructions from Ahfachkee School golf coach Amos Mazzant and his wife, Cookie, proved beneficial.

“I think they had so much fun practicing; then they’d make it and they were ecstatic,” Amos Mazzant said.

After lunch and the final events ended, Councilman Tiger awarded medals to the top finishers in each event. He said he plans to hold the Invitational every spring.

“Some are asking to do it two times a year. I don’t know about two times; that’s kind of rough, but we’ll see about it,” he said.