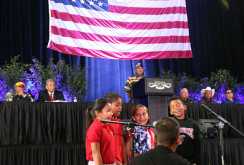 BIG CYPRESS — Giant red, white and blue drapery in the form of the American flag provided a patriotic cover for more than 300 people at the 27th annual Veterans Day Celebration Nov. 3 inside the Junior Cypress Rodeo Arena entertainment complex in Big Cypress.

From the welcoming remarks by Big Cypress Councilman Mondo Tiger to the closing sound of Taps from Lawrence Morse’s trumpet, patriotic themes were woven together for more than two hours through speeches, poems and music.

“I’ll accept it for all the veterans,” said Cypress, who drove tanks in Germany during his service in the late 1960s.

“I was a loader for a while, then the driver got discharged,” Cypress said after the ceremony. “The commander told me to get in that seat. I stayed there. It was easy. You don’t have extra duty. You just drive.”

“We had to be ready. We were on alert all the time,” he said.

Nearly three decades ago, Cypress, along with Jacob Osceola Sr. and the late Roy Nash Osceola, became the driving force behind the formation of the Tribe’s veterans celebration.

“Native Americans always celebrate their warriors,” said Cypress, who served as co-emcee of this year’s celebration with Sally Tommie.

Osceola’s military service came in the early 1970s after he graduated high school and found there weren’t many employment opportunities available.

“So I joined the service. I wanted to see what it was about,” said Osceola, who served in the Army’s 82nd Airborne in Vietnam.

Daryl Jones, the event’s guest speaker, started his military career in the Air Force Academy only after he initially showed no interest in the academy as a high school student.

“(An academy liaison officer) told me there had never been a black from the state of Mississippi ever to go to any military academy and that I probably didn’t have what it took to make it. That’s all he needed to say; I was gone,” Jones said.

Jones went on to graduate from the academy with honors and served in active duty for seven years in the Air Force, flying F-4 planes. Later, he became a lawyer, opened his own law firm and served in the state legislature.

Jones outlined his recipe for success with four points: believe in yourself, have clear written goals, work constantly toward those goals and learn from the best.

Alexis Jumper and Thomlynn Billie, representing Miss Florida Seminole Princess and Jr. Miss, respectively, thanked the veterans during their remarks as did Pastor Salaw Hummingbird, who urged the audience not to forget those who are currently serving the country.

“I think about our men and women that are still over there fighting today, still battling today. Some of them are not going to come home,” Hummingbird said.

Peggy Sue Cypress and Sarah Osceola led the pledge of allegiance. Janessa Jones read a poem that she wrote.

“I am a Veteran” poem was spoken by Sally Tommie. Names of the 26 deceased Seminole veterans and nearly 50 living Tribal veterans were also read aloud.

Hundreds of handshakes ensued as Tribal veterans and those who work for the Tribe were thanked by audience members.

“Please hug a veteran today,” Councilman Tiger said. “Tell them thank you for what you’ve done. A lot of mothers and fathers lost their sons and daughters so we could have freedom. A lot of men and women have come back crippled. If you get a chance, hug a veteran today. Tell them, ‘I love you very much.’”