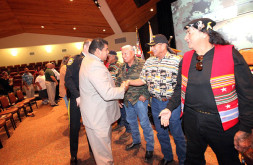 BRIGHTON — One sentence from Cheyenne Nunez’s poem epitomized the appreciative atmosphere inside the Florida Seminole Veterans Building in Brighton Nov. 6.

“I wake up without fear on this day and every day thanks to the brave men and women who have fought for this country,” the Jr. Miss Florida Seminole Princess read aloud to the audience during a morning ceremony that honored and remembered military veterans from the Seminole Tribe.

One of those brave men was the late David “Bob” Motlow Sr., who served two tours of duty in Vietnam with the U.S. Army and earned a Purple Heart for wounds received in combat. As part of the 27th anniversary Seminole Veterans Celebration and Recognition, U.S. Army Vietnam veteran Stephen Bowers presented Bob’s family with a plaque on behalf of the Florida Seminole Veterans Foundation.

The legacy of David “Bob” Motlow Sr., who died earlier this year, was fondly recalled during an emotional presentation.

“I’ve always felt privileged to know that he was a man that cast such a huge shadow, that I want my kids, my grandkids, my great-grandkids to always know who (he) was,” said Bob’s son, David Motlow Jr., who fought back tears as he spoke to the audience alongside his mother, Agnes Motlow, his aunts Shirley, Leomna and Bonnie, and other family members.

Born on Oct. 15, 1949 to Jack and Mary Motlow, Bob primarily grew up on the Hollywood Reservation. A member of the Panther Clan, he was one of 10 children. He joined the Army in 1967, and after completing basic training at Fort Lewis in Washington, Bob was assigned to the 173rd Airborne Brigade in Vietnam. As part of his second tour of duty in Vietnam, he completed Ranger school and worked in reconnaissance.

Bowers referred to an article about Bob’s military service that mentioned “(Bob) was always looking out for other Rangers.”

Bob and Agnes wed in the early 1970s. In their 43 years of marriage, the couple had three children – David Motlow Jr., Davina Motlow and Kenny Kittle Jr. They also have 12 grandchildren.

David Motlow Jr. shared stories with the audience about his father’s military service, including a chaotic and smoky scene during an attack in Vietnam in which his father raised his rifle to the chest of an older man who was fleeing the scene. He said his father realized this man was “running for his life” and let the man go.

“He realized at that moment he had gotten too good at ‘hunting men,’” he said.

After serving in the war, Bob returned to Florida and worked as the water resource coordinator for Big Cypress for more than 10 years and served on the board of the South Florida Water Conservation Committee on behalf of the Tribe in the early 1980s.

Other tributes in the ceremony came from U.S. Marine Corps veteran and Seminole Police Officer Jack Nash, who read the names of all living and deceased veterans from the Tribe.

Nash also presented a plaque to Bowers, who was recognized for his dedication and service to the Tribe’s veterans and other American Indian and Native Alaskan veterans throughout Indian Country.

The plaque included praise for Bowers’ efforts in organizing the Tribe’s annual Veterans Day ceremony and for his “tireless support” to achieve congressional approval for the American Indian Veterans Memorial on the National Mall in Washington, D.C.

Marc McCabe, a U.S. Marine Corps Vietnam veteran who works with Tribal veterans on benefits, served as the guest speaker.

Tribal leaders also praised the group of veterans, which included Brighton Councilman Andrew J. Bowers Jr., a U.S. Marine Corps veteran. The veterans lined up in front of the stage for handshakes from audience members at the conclusion of the ceremony.

“You all served as guardians of our American way of life,” said Big Cypress Board Rep. Joe Frank.