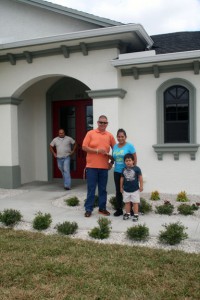 IMMOKALEE — The old adage that all good things are worth waiting for summed up the enthusiasm of Immokalee Board Liaison Dorothy Scheffler as she accepted the keys to her new house on the Immokalee Reservation.

“It’s been seven years since I decided it was time to do something about my old HUD house that suffered from poor construction, no footers, mold and numerous other faults,” Liaison Scheffler said. “I investigated the financial aspects, filed the necessary paperwork, selected a floor plan and moved out of my old disaster in anticipation of a new home. It has now been six years since they tore the old house down.

“Contractors were selected along with appliances, paint colors and floor coverings, and then the bottom fell out,” Liaison Scheffler continued. “I was devastated and after numerous delays, purchased a home off the rez. Although it didn’t seem so at the time, it was probably the best thing that could have happened.”

Reflecting on the economic crisis that has affected so many Americans, Liaison Scheffler sees the positive side of her own housing drama. Her delays prevented her from taking out a mortgage that would have placed her upside down in the housing market. She downsized her initial floor plan and recognized her responsibility to help conserve the environment. She has gone green.

When things finally got back on track, she selected Seminole Construction and Development Inc., a partnership in which Pete Aguilar Jr. is the president. It was her opportunity to enlist the services of a business operated by a Tribal member and encourage Tribal entrepreneurship.

Once her decisions were made, construction moved at a rapid pace. Six months from the day that ground was broken, she was turning the key in her front door, despite rain delays and minor glitches that always accompany projects of this size. Her contractor has the Tribal member’s interests at heart.

Selecting a 2,000-square-foot, three-bedroom, two-bath floor plan with entry, she has decreased the air conditioning and heating space. A cement block home with vaulted ceilings and state-of-the-art insulation properties has increased the energy efficiency. Water-saving toilets, faucets and shower heads reduce the consumption of potable water.

“I really like the exterior with its decorative moldings and stucco bands. It has character,” Liaison Scheffler said. “I was able to make good, selective choices and stand back and watch as Pete carefully supervised his expert team of sub-contractors. They were really good about any issues that arose during construction. The house literally grew out of the ground right before my eyes.”

“It passed Tribal inspection with flying colors,” Seminole Tribe building inspector Gary Viggiano said. “I find that using a Tribally owned company is beneficial because they pay attention to detail. I just finished my walk through and can honestly say that there have been no corners cut during construction, and that makes my job easier.”