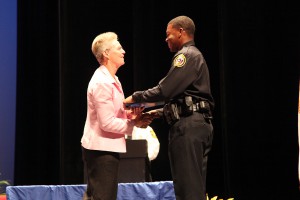 DAVIE — The Seminole Police Department welcomed one more officer into their ranks on April 18.

New officer Clifford Turnquest graduated from the Broward College Institute of Public Safety’s Police Academy among 14 other Broward County cadets in his class, earning a special recognition in the process.

Officer Turnquest received the Officer Frankie Shivers Memorial Award, an honor presented to one cadet who shows “true heart and the attitude of a true leader,” presenter Deputy Ian Hunt said. Officer Shivers was a first-year Hollywood Police Officer who was shot and killed by a suicidal person whom she was trying to rescue from a burning car.

“The award represents everything the Tribe is about: leadership and overcoming adversity,” Seminole Police Chief William Latchford said. “Officer Turnquest is a great employee. He’s an employee that loves working for the Tribe, and he’s a role model for the service aides and police officers.”

Officer Turnquest began his career as a service aide for the Seminole Tribe in February 2010. He mainly worked the gates on the Hollywood Reservation until fellow service aides inspired him to apply to the Police Academy later that year. He attended his first class last year on Nov. 7 – his birthday.

“It was a great birthday gift,” he said.

For 25 weeks, he and his classmates went through rigorous physical and academic training to prepare for the line of duty.

“It was definitely very challenging, but that was something I was looking forward to,” he said. “The Police Academy was a once-in-a-lifetime thing. It made me a much better person.”

After graduation, he completed the required State Officer Certification Exam and began his new job as an officer for the Seminole Tribe.