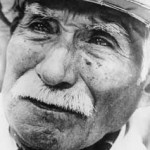 MOORE HAVEN — The mystery is solved. The Billie Bowlegs III road sign has been found.

The Glades County landmark has been safely stored in Hendry County at the LaBelle office of the Florida Department of Transportation (DOT) waiting for the completion of construction improvements at the intersection of West State Road 78 and US 27, where a historical marker honoring the great Seminole leader has stood since 1965.

Reports that the sign may have been stolen or lost alarmed Myrtice Young with the Polk County Historical Commission, the organization which partnered with the Seminole Tribe of Florida in erecting the current sign in 2008. It replaced the original, which had rusted out and had been damaged in several accidents since it was erected in 1965, not long after Bowlegs’ death. The original sign was sponsored by the now-defunct Peace River Valley Historical Society.

“People don’t realize the abuse that those historical signs go through. They get knocked down and beat up all the time,” Young said. “That sign is very important to us. Billie Bowlegs was a great friend and historical figure to many people in Polk County and throughout the Peace River Valley.”

Fun-loving and gregarious, Billie Bowlegs III was one of the most familiar Seminole Indians in Florida history and an early proponent of outreach and cultural preservation. A maternal grandson of Osceola and member of the Snake Clan, his name was originally Billy Fewell; as an adult, he renamed himself after Billy Bowlegs (Holata Micco), a prominent Seminole Wars leader whom he greatly admired. He spent most of his life on lands that became the Brighton Reservation, playing a significant role as a principal Tribal representative during the original government negotiations regarding the establishment of Indian reservations in Florida.

The marker contains the following words:

In the Ortona cemetery, eight miles west of here, lie the remains of a noble citizen of the Seminole Tribe of Florida, a faithful representative of his people and a true friend of the white man.

Erected by the Polk County Historical Commission and the Seminole Tribe 2008.