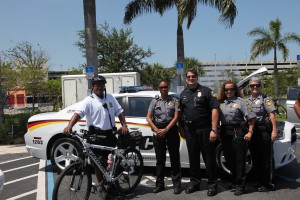 HOLLYWOOD — The Seminole Police and Fire departments had a strong presence at the South East Police Motorcycle Rodeo and Public Safety Expo, which took place on May 5 at the Hollywood Hard Rock Hotel & Casino.

Four SPD officers competed in the Motorcycle Rodeo along with about 100 riders from more than 20 local law enforcement agencies throughout Florida and the East Coast. The riders maneuvered through a variety of challenging courses to help raise money for Concerns of Police Survivors (C.O.P.S.), a national organization dedicated to helping children and families who have lost loved ones in the line of duty.

“It shows the general public that the Seminole Tribe of Florida is prepared for anything that comes up,” Seminole Police Chief William Latchford said. “We’re showing that we’re a leading department in the country.”

The Seminole Fire Department showcased their fire engines and equipment and gave kids the opportunity to put out a real fire with a fire extinguisher during a demonstration.

“We’re trying to create excitement and interest in the Fire Department,” Seminole firefighter Mark LaMadeleine said. “These kids had a blast out here.”

“I know how my police department is,” she said. “They’re good. I know almost every one of them, and they’re doing a great job.”