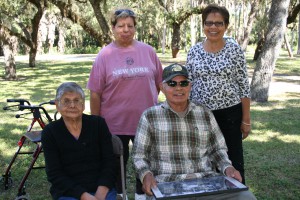 BRIGHTON — More than 100 family members and friends gathered under the oak trees at the residence of former Chairman Howard Tommie on Nov. 3 for a family reunion on the Brighton Reservation.

Because years have passed and children have had children of their own, the family decided to hold a reunion to bring its members back together and to form new memories.

Many generations, descending from the eight children of Lena Morgan and Joe Bowers, attended.

“That’s what the theme is for today is honoring the ‘Bowers eight,’” said Stephen Bowers, son of Casey Bowers, one of the original eight siblings.

Many families traveled from different reservations and a few came from out of state to join in a day of fellowship and reminiscing. The day also included music, food, games and bounce houses.

Back when things weren’t so modern and the family lived near each other, the original eight would meet on a regular basis, Dan Bowers said.

“I remember when my dad would go visit people,” he said. “He would stay for hours just enjoying talking and having good conversations…It means a lot to me (to see everyone here) because we all grew up together.”

As for everyone who attended, they could not have agreed more and could not have been more satisfied seeing everyone come together, including Stephen’s sister, Wanda Bowers, one of many organizers of the family gathering.

“I think it’s awesome that we are here because I don’t see them (my family) all the time because I live on the Hollywood Reservation,” Wanda said. “I like coming back (to visit) because it’s an all-afternoon hangout. When we moved to Hollywood, we don’t get that.”

One of the most important parts of the reunion was meeting relatives and family members who they had not met before, Wendi Riley said. “It’s my family that doesn’t get to see a lot of my family members. A lot of people haven’t ever met my husband before, and we have been together for 10 years already. More importantly, it’s bringing back the childhood memories that we almost [forgot].”

Knowing the hardships that some of the family endured through the years, including serving in the military, Stephen said, “I think they (the ‘Bowers eight’) would be proud to see all our family here.”