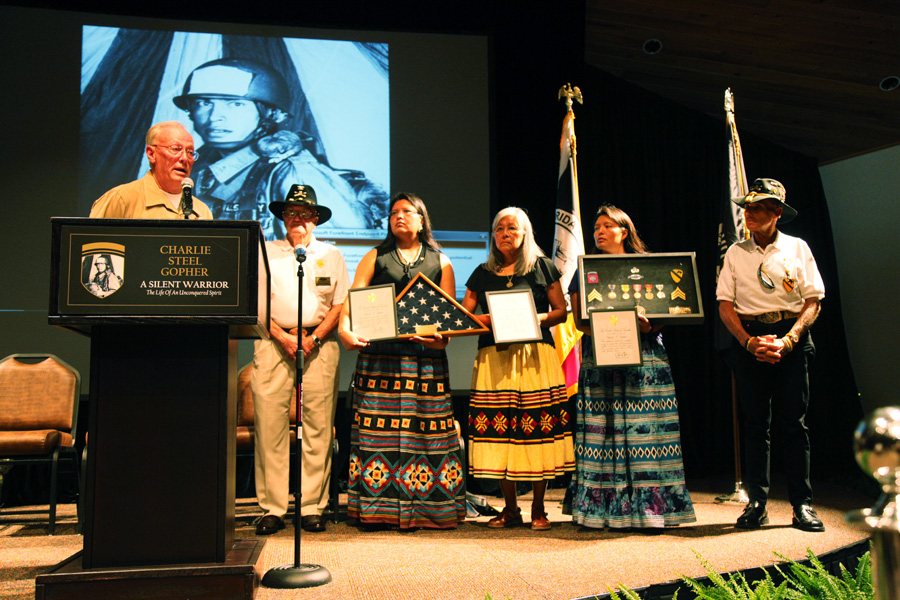 BRIGHTON — He fought for this country in five of the most ferocious campaigns of the 10-year Vietnam War, including the Battles of Ia Drang/Kim Son, Pleiku and Hoa Hoi. Then, they sent two truckloads of armed soldiers to arrest him in his hometown so they could officially throw him out of the U.S. military in dishonor.

He earned more than a dozen medals for bravery, most of them for saving the lives of hundreds of American soldiers as a frontlines M60 machine gunner. But the U.S. Army never gave Charlie Steel Gopher any of his medals, keeping the warrior in jail until the next frontline combat job came open, a cycle the Army repeated over and over again.

He received a traumatic brain injury and encephalitis (brain inflammation) from a grenade blast, spent 32 days in a hospital and then was sent right back to the frontlines again. The Army never awarded him a Purple Heart for his battle injury or the Bronze Star for his many documented heroisms in combat.

He never talked much about his three years, 11 months and 29 days active duty, almost all of that on the Vietnam frontlines, yet his family knew he was a hero. The U.S. Department of Veterans Affairs (VA), however, refused his family’s request for a flag and military burial benefits after his death, barely two months after they kicked him out of the Army. Although he suffered symptoms of “battle fatigue,” or post-traumatic stress disorder (as it was later called), Gopher was given machine guns and bullets, rather than treatment, for the combat mental disorder that eventually took his life.

Most of that all changed Nov. 1, however, when the flag, medals, benefits – even a letter from U.S. President Barack Obama – were officially presented to Gopher’s wife, Louise, and daughters Rita and Carla at a colorful and heart-warming public tribute to the great soldier, A Silent Warrior: The Life of an Unconquered Spirit, sponsored by the Seminole Tribe of Florida at the Brighton Veteran’s Building.

“Welcome home, Charlie,” said Marc McCabe, the Vietnam Veterans of America (VVA) Bureau Chief whose sleuthing and pressure on government authorities reopened a case the Army had kept closed for 38 years. The cause was initiated and supported by Charlie’s “determined” daughter, Rita, and “outspoken” sister Beulah, as described by McCabe in his remarks to a packed auditorium.

“It’s not over yet,” declared Rita, referring to the U.S. Army’s refusal – so far – to upgrade Gopher’s discharge to honorable. In fact, the Army recently responded to a request for information from U.S. Congressman C.W. “Bill” Young by declaring the case closed.

“There was a hearing, and they closed the case because the veteran did not attend. I flew to Washington to tell them how stupid that was since the veteran, Charlie Gopher, had been dead for 38 years,” said McCabe, who has made a full-time job out of regaining benefits improperly denied Native American Vietnam veterans. “That case is wide open, sitting on somebody’s desk.”

A spokesperson for Young said the Congressman “does not like to be lied to. He is going to get to the bottom of all this.” Congressman Young is the country’s longest-serving representative and Chair of the U.S. House Appropriations Subcommittee on Defense. “He’s the one who approves the Army’s budget,” McCabe said. “They were messing with the wrong guy.”

Neither the U.S. Army nor the VA sent representatives to attend the Charlie Gopher event. “They were embarrassed,” McCabe said. “The VA originally turned the family down. The Army put a civilian on a case regarding a soldier who put his life on the line. And the civilian closed the case because the dead soldier did not appear at his hearing.”

“He was just a great athlete. When I saw him run the 100-yard dash, he would just leave everybody in the dust,” said Osceola, the marvel still fresh in his voice. “He was a great, great man.”

To which former Chairman Cypress quipped, “It doesn’t matter what the stories you hear say about the rabbit beating the gopher. Charlie, he was one fast gopher!”

Cypress noted that Gopher played the catcher’s position in baseball without a face mask. It brought to mind tales from Gopher’s platoon mates about Gopher standing erect in his foxhole, firing his machine gun to cover escaping troops, oblivious to the bullets and grenades flying by his face.

“That was kind of scary,” former Chairman Cypress said. “But Charlie was a great warrior, and we are going to hear more about what kind of person he was during wartime. And from what I’ve heard, he was better than John Wayne. John Wayne only fought in the movies, but Charlie was the real thing.”

Seminole Chairman James E. Billie, who completed two tours of Vietnam for the U.S. Army, addressed the crowd with an anecdote of two Seminole soldiers meeting by coincidence in Vietnam.

“It’s a great day to see Charlie being honored,” the Chairman said. “I was in Vietnam back in 1968. It was monsoon season, and the tents we had to sleep in were wet. Water was shin high to our boots, and I splashed through and entered a building. It was so dark you had to have a cigarette lighter to see.”

Chairman Billie’s tour was over, and he was to catch a flight home in the morning, he said, describing his last night as a search for an empty bed and a familiar voice he heard in the darkness.

“I heard (a) deep, resounding voice,” he said. “I knew that voice from somewhere. Charlie Gopher and I would get in our squabbles, and I got some knots on my head . . . Finally, it came to me. He was in Vietnam the same as I was. I said, ‘Gopher!’”

A deep growl, “Who wants to know?”

“This is James Billie.”

“This is Staff Sgt. James Billie!”

Reunited, the two flew together to Tokyo for plane repairs and then on to Seattle, where they transferred to different flights east. Chairman Billie had no idea that Gopher was absent without leave at the time.

“I admired Charlie when I was growing up,” Chairman Billie said. “Some bad things happened to Charlie, and sometimes they never get reinstated. I’m happy that Charlie’s story will now be told.”

President Tony Sanchez Jr. told the audience he “could not miss this event. Luckily for me or unlucky for me, I did not serve in the military. I was in school. I had a brother who served in the military, a Marine who made rank and passed away seven years ago. Sitting here, I remember speaking with my brother, and listening to James, you see how sometimes you take for granted that someone will be there for us. I’m happy for Charlie’s family after all these years.”

“I knew Charlie better when I was growing up,” Councilman Bowers said. “He had a little black horse that we would ride double. Night and day. That horse was very popular among the Seminole youth because that was the only horse we knew that would rear up like Roy Rogers did.”

“We went to Joe Johns’ house one night. It was late. I remember Charlie saying, ‘I’m gonna bake a cake.’ He went into the kitchen, got all the ingredients you needed. Sure enough, he baked a cake. We ate some that night and got up and ate it in the morning.

“Just three short years ago, I remember some folks came, and I heard some stories about the war. I wasn’t surprised because I knew what kind of character Charlie had. When we would have our little afternoon football games, he was the one we were all scared of. He didn’t slow down for anything. We didn’t have no pads. We were scared because we were afraid we’d get broken bones if we ran into him.

“I am glad he was recognized for what he did in combat. This day is long overdue, but from what I understand so far, it was not Charlie’s fault. I don’t know what kind of blame you can put on the Army ‘cause there was something called PTSD (post-traumatic stress disorder) that came on after you came out of the jungle. I don’t think the Army or anyone else knew about this thing. But when I hear those folks say, ‘I thought he was always crazy and drinkin’ all the time,’ well maybe so, but when you think of the things I just said, PTSD it is called, I can’t say it was (the real) Charlie that they saw when they described him like that.”

Next was Brighton Board Rep. Larry Howard.

“I know where [Charlie Gopher] comes from, and it’s a good family,” Rep. Howard said. “I’ve watched my Tribe battle for years and years and years, and we are here today in honor of Charlie Gopher. He served for our country, and he also served our Tribe. We are proud of him. I want to thank his family for the great things he did for this country.”

With bagpiper Mike Hyde playing softly in the background, the VVA’s McCabe spoke on the topic, Who was Charlie Gopher?

“I knew what Charlie went through,” said McCabe, a former Vietnam vet himself. “When I first went to D.C. on behalf of Charlie, I ran into the proverbial brick wall. The U.S. Department of Veterans Affairs did not want us to reopen the case…We wanted to make sure Charlie had this day where he is recognized as a solder, a warrior and a Tribal member who has served with pride, distinction and valor.”

McCabe was joined at the podium by Col. Jim Dingeman, of the 600-member 12th Cavalry Regiment Association, and Jim Stokely, 2nd Vice President of the 1st Cavalry Division Association, who discussed the 12th and 1st Divisions’ Vietnam history. Col. Dingeman described war as “boredom, apprehension and then intense activity where you are surviving depending on yourself and your fellow man.”

Stokely pointed out that “the M60 machine gun was a critical weapon for the Air Mobile (Brigade). You can see how vital he was to the organization…PTSD was an unknown thing back in those days. We were not sensitive to the problems and the struggles that young men have when facing a combat situation.”

The tribute ended with the posting of the colors by the Seminole Police Department Color Guard, the Pledge of Allegiance and a pledge to the Seminole flag led by Brighton Seminole Princess Cheyenne Nunez and Brighton Jr. Miss Seminole Aubee Billie, both dressed in brightly colored royal patchwork outfits. Princess Nunez also recited a poem she had written for the occasion just prior to the presentation of a shadow box containing Gopher’s medals to his family. (McCabe had secured the medals recently from MacDill Air Force Base in Tampa; the VVA created the shadow box.)

Both the Purple Heart and Bronze Star medals previously denied Charlie Gopher are being officially applied for, McCabe said. “He deserves them. The fact he didn’t get those awards is just another example of the treatment of Native American veterans during that era.”

The program ended with Amazing Grace on the bagpipe, Taps from trumpets far away and Matt T. Tiger, pastor of the First Seminole Indian Baptist Church of Brighton, giving the closing prayer.
“Charlie S. Gopher, may his spirit rest in peace,” Pastor Tiger said. “God rest his soul.”