Skip to content
You are here
Home > Sports > Neko Osceola, Andre Jumper shine on the gridiron 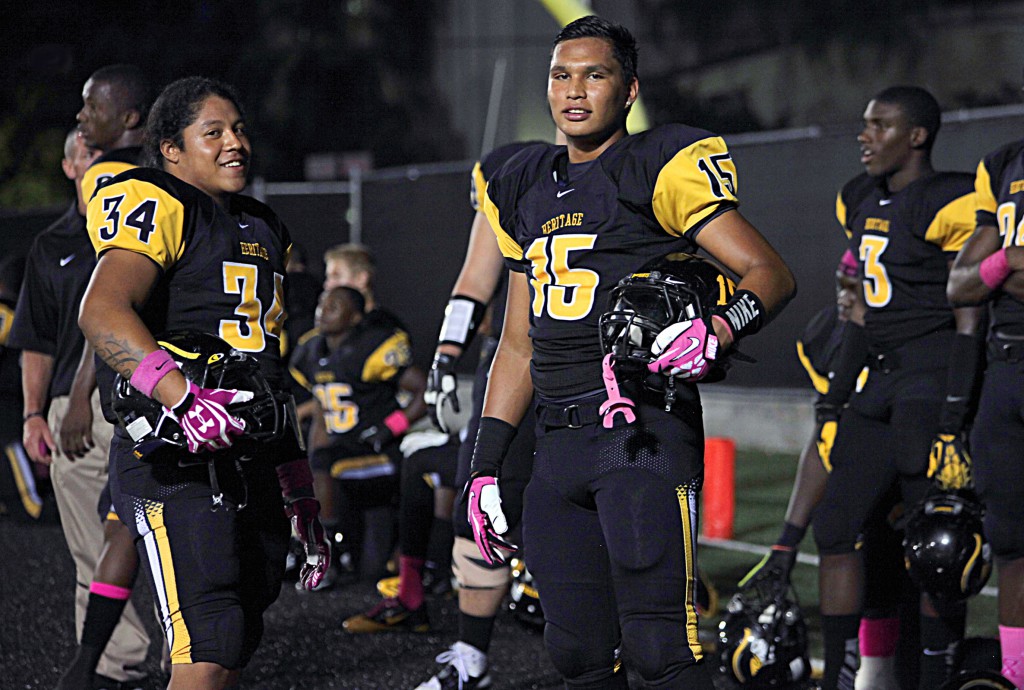 PLANTATION — American Heritage High School in Plantation is in the midst of a winning football season and two Seminole players have contributed to the Patriots’ victories on the gridiron.

Neko Osceola and Andre Jumper, though never on the field together, have added to the strength of the team through their determination and perseverance.

Osceola is a fullback on the offense, and Jumper plays defensive end and linebacker for the defense. At press time, the Patriots were 6-1 and were ranked third in the state by the Associated Press.

Both teenagers have played for years but enjoy the sport for different reasons.

Osceola, 17, is an all-round athlete who plays basketball and runs track. He enjoys football because he likes the game and being part of the team. Jumper likes the physical aspects of the game.

Both boys enjoy the status of being student athletes and want to play college ball. The challenge for Osceola is doing well in school while staying dedicated to the sport. Both take many long hours during the week and on the weekends.

“I do what I do on the field and in the classroom, go home, get a good night sleep and do it all over again,” said Osceola, of Hollywood. “But I like being an example to other kids at school.”

After high school he wants to play college ball, study sports management and become a sports manager or athletic trainer – if he doesn’t become a pro football player. Osceola’s inspiration comes from his family, including his older brother Jerome Davis; his mother, Patricia Wilcox; and his 7-month-old nephew Jerome.

He strives to be humble and responsible like his mother and brother and appreciates that his mother is a very traditional Seminole.

Osceola has sports heroes as well, including his stepfather former NFL running back Lorenzo White, Michael Jordan and University of Miami running back Duke Johnson. He shared simple advice for students who want to pursue athletics.

“Listen to the coaches when they tell you something,” he said. “Don’t take anything for granted and get your grades now instead of waiting for the last minute to try to pull them together. It means a lot to be a student athlete.”

Football coach Mike Rumph said he couldn’t imagine the team without these two players and has noticed improvements in both boys.

Rumph credits Jumper’s rodeo experience for making him a stronger and tougher player. He is pleased with how well Osceola plays on special teams and blocks for one of the top running backs in the state, Sony Michel.

“They have both found their niche on the team this year and have a solid spot where they can contribute to the team,” Rumph said. “They worked hard and sacrificed a lot over the summer to help the team get better.

Because of that, they are helping contribute on Friday nights.”

Being a student athlete means juggling sports without sacrificing academics – not always an easy task. But Jumper seems to have found the winning formula. With his 3.5 GPA, he has managed to thrive in both arenas. His favorite subject is history.

“I like to learn about what happened before we were even thought of,” said Jumper, of Big Cypress. “Of people’s struggles, what they had to go through and how they lived.”

Because he lives in Big Cypress, Jumper spends a lot of time commuting to and from school. He gets home late and then does his homework.

“I think of Friday as payday,” he said. “I work hard from Monday to Friday. In the end it will get me to where I want to be and I can tell people I played football, maintained good grades and graduated from high school.”

“I see myself going to college and pursuing my dream of playing football,” he said. “If that doesn’t work out I’d like to be an architect.”

Jumper finds inspiration in his grandfather, Jonas Cypress, who encourages him to expand his horizons.

“He’s gone through a lot,” Jumper said. “He inspires me to do my best and drives me to go off the rez. He knows it’s not the only place we have. He encourages me to see the rest of the world.”

Although he is only 17, Jumper has some sage words for other students.

“Keep working hard; don’t stop,” he said. “Don’t let anyone tell you that you can’t do something. If they say that, it should make you want to drive harder. When you work hard, it will pay off.”