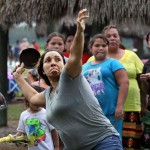 “It’s being who you are and celebrating it,” he said.

The first American Indian Day was proposed in the early 1900s by Dr. Arthur Caswell Parker, an anthropologist of Seneca descent who founded the Society of American Indians and the National Congress of American Indians, which advocated for United States citizenship. The Boy Scouts of America had already begun setting aside a day to honor the “First Americans” when Parker suggested that they do so annually – which they did.

In 1914, another Native rights advocate, the Rev. Red Fox James traveled 4,000 miles on horseback across the U.S. to Washington D.C. to petition President Woodrow Wilson for Indian Day. In 1915, James  went state to state on horseback again garnering support from 24 governors to extend citizenship to Native Americans.

According to the Bureau of Indian Affairs website, the first American Indian Day likely occurred in New York in 1916 when the governor decreed that every second Saturday in May be designated as such,  though several other states began commemorating the day on the last Friday in September. Indiana followed in 1919. Massachusetts made it law in 1935.

In 1968 California Gov. Ronald Reagan signed a resolution for American Indian Day but in 1998 the California State Assembly legislated that it be an official state holiday.

In South Dakota, lawmakers embraced the holiday so much that American Indian Day was ordered to replace Columbus Day.

“You know, America has had Columbus Day forever but he was just a lost soul looking for salvation and for centuries he was honored – but for what? Today is for us,” Rep. Frank said.

On Sept. 26, in a clearing across the street from the Ah-Tah-Thi-Ki Museum in Big Cypress, more than 150 Tribal members celebrated despite sporadic  downpours.

In a cooking chickee, women braved the teeming rain to compete in traditional sofkee, frybread and frychicken contests.

“It takes a lot of dedication to get out here and work over a fire in 95 degree weather,” said Wovoka Tommie, who served as the master of ceremonies.