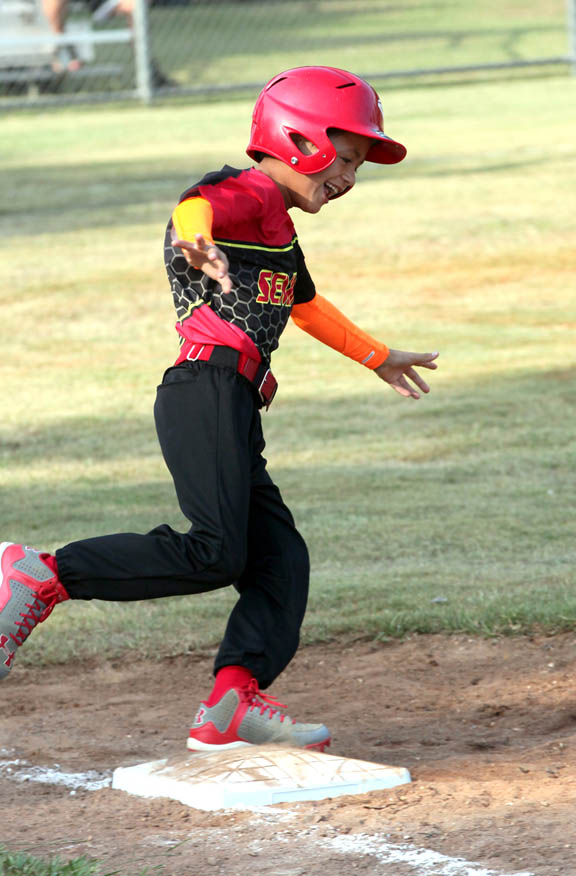 ATMORE, Ala. — After only one inning in the Seminoles’ 9-10 baseball opener at the Native American Youth Organization (NAYO) tournament, Ramone Baker’s No. 23 uniform contained enough dirt to look as though it had seen an extra-inning war. That’s what happens when a player is involved in a rundown as a base runner and a play at the plate on defense.

But the mound is where Ramone made his mark.

Ramone, who pitched every inning for his team, delivered accuracy and power as the right-hander struck out the side in order in the second, third and fifth innings of a 3-2 win against the Choctaw Braves on July 17. During one smooth stretch, he fanned seven in a row.

When they weren’t in the field on a day when the heat index surpassed 100 degrees, Ramone and his teammates tried to stay comfortable in the dugout at Tom Byrne Park, the only NAYO venue located off the Poarch Creek Reservation in Atmore, Alabama. The Seminoles snacked on apples and draped wet towels across their necks while a giant orange fan revved its blades in the corner.

Ramone, whose father coached the team, helped his own cause in the fourth by walking and scoring to knot the game at 2-2. The Seminoles won it in the fifth on an RBI groundout from Corey Jumper. Emerson Billie had a double to help the offense.

After suffering its first loss later in the day, the Seminoles returned the next morning and eliminated the Braves with a 4-1 win.

The Braves learned the hard way to respect the bat of Seminoles catcher Dakoya Nunez. With Dakoya at the plate in a 1-1 game in the third, the Braves outfield stood only a few steps behind the infield dirt. Dakoya promptly gave the outfielders something to chase when he drilled a fastball over their heads into deep center. His triple brought in Jarrett Beecham with the go-ahead run.

Later in the inning, Corey laid down a perfectly executed sacrifice bunt to make it 4-1.

The victory carried additional significance for the Seminoles because it came on the birthdays of coach Preston Baker and his son, Pherian, the team’s first baseman. Pherian had an infield single.

The Seminoles advanced to the championship round, where they finished runner-up to Poarch Creek. Still, the second-place showing exceeded coach Baker’s expectations.

“The boys played good, better than I thought they would,” he said. “I’m proud of them. They played their hearts out.”

Even the oppressive, humid air couldn’t stop Tristen Wilcox and his new bat.

With the Seminoles’ 16-17-year-old baseball team trailing by a run in the fourth inning of its NAYO opener July 17, Tristen drove a two-run shot over the fence in right-center with a bat he purchased a couple days earlier.

“He broke in his bat in the right way: dinger, opposite field, pretty deep, too, between 340-350 (feet),” said coach Jason Thomas.

Tristen, who recently concluded his senior season on the American Heritage School baseball team, arrived in Atmore as essentially a new player.

“Brand new bat, brand new cleats, new glove; still has the tags on it,” he said.

Although Tristen’s blast gave the Seminoles an 8-7 advantage, the Road Warriors (Cherokee) regained the lead in the fifth inning before the 1 hour, 30 minute time limit ended the game.

The Seminoles earned the runner-up trophy the following day. They topped the Cherokee Carnage in the morning before falling to the champion Road Warriors.

The Seminoles made the most out of a thin lineup that included a few non-Seminoles to field the team.

“You do the best you can. You get out there and try to put the ball in play, force errors, get a walk when you can and play smart baseball,” said Thomas, whose son, Layton, played in his final NAYO tournament before embarking on his college baseball career at Florida SouthWestern State College in Fort Myers.

A pre-tournament strategy implemented by Jeanne Billie in Brighton paid off more than 500 miles away in Alabama.

Concerned about how her 7-8-year-old Seminoles baseball team would handle warm, early morning games at the NAYO tournament, Billie opted to hold practices to mimic those conditions.

“I was worried being so early in the morning that the boys would be lagging,” she said.

Thanks to active bats, her worries quickly evaporated. Bryce Baker led off the team’s 8 a.m. opener July 17 with a single to center field. Ukiah Billie, Keenan Jones, Jaydence Urbina and JB Anderson followed with hits early in the Seminoles’ 15-6 win against the Avengers (Choctaw).

No player smiled more than Bryce, who had plenty of reasons to enjoy the game as he hit for the cycle with a single, double, triple and home run.

Other key hits came from Quayton Billie, who belted a home run, and Jaydence, who notched a triple.

The Seminoles won their second game later in the day before being eliminated in the nine-team division with a pair of losses the following day, including a 16-8 setback to a Choctaw squad.

Leading up to the tournament, Billie said attendance at practices was nearly 100 percent every day, which mirrored the effort provided by her players. For example, in the loss to Choctaw, the Seminoles received a home run from Bryson Smith, but trailed by 10 runs entering the fourth inning. They needed at least one run to avoid the 10-run mercy rule, so they promptly delivered four runs behind RBIs from Jaydence, JB, Bryce and Alex Rodriguez. Quayton smacked a run-scoring double in the fifth before the Seminoles were finally ousted, 16-8.

The Seminoles went winless in the five-team 13-15 baseball division with losses to Choctaw and the Dirtbags (Cherokee).

“Pitching killed us,” said Lucas Osceola, who had a single and two walks in the final game.