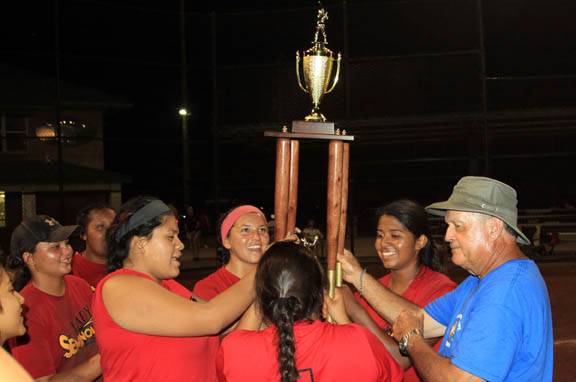 ATMORE, Ala. — For two days, the Poarch Band of Creek Indians softball and baseball fields in Atmore, Alabama were filled with hundreds of players, coaches, officials and spectators who sweltered as the heat index soared past 100 degrees, just a bunt away from the Florida Panhandle.

From a weather standpoint, the coolest part of the day came early in the morning.

From a softball standpoint, the wee hours also brought the coolest part of the Native American Youth Organization (NAYO) Softball and Baseball Tournament for the Seminole Tribe of Florida.

Just before 2 a.m. on July 19, the Lady Seminoles’ 16-17-year-old softball team concluded a grueling but satisfying day by capturing the Tribe’s lone championship with a 24-2 win against the Cherokee’s Rez Raiders.

After losing their first game of the tournament, the Lady Seminoles faced an uphill battle on day two to stay alive in the double-elimination format. To win the title, they needed to win four games in a row. They picked a perfect time to go 4-for-4.

The championship game lasted 2 hours and 25 minutes and featured two celebrations by the Lady Seminoles: the first after the third inning when nearly everyone believed the game was over and another celebration when it actually ended after seven innings.

Delaney Osceola tossed a four-hitter in her final NAYO game, something her Lady Seminole teammates used as fuel for determination in their championship drive. Richard Osceola, Delaney’s father, coached.

“It’s exciting for me because it was Delaney’s last year,” said catcher Lahna Baker. “She really wanted to play, so I’m glad we could come out and win.”

The bats stayed awake long enough to belt out 19 hits. Led by Cheyenne Nunez, seven Lady Seminoles notched multiple hits. Cheyenne was unstoppable out of the No. 3 spot with a 4-for-4 performance that included a walk, double and two RBIs. Other standouts included Tyra Baker (3-for-4, 4 RBIs), leadoff batter Lahna Baker (3-for-5, double, triple), Sarah Descheene (2-for-3, 1 RBI) and Deliah Carrillo (2-for-4).

The Lady Seminoles also received a boost from four Mississippi Choctaw players, including Raine King (3 hits) and Delaine McMillian (2 hits). They were late additions to help fill the roster before the tournament started.

“We came ready to play,” Lahna said. “For us to be put together as a last-minute team, we did outstanding.”

With a 14-1 lead after three innings, the Lady Seminoles, and just about everyone else in the park, thought the game was over because of the 10-run mercy rule. The team hugged, hollered and shook hands with the Rez Raiders before finding out there was more work to be done. The championship must go seven innings, a tournament official told the team. After a lengthy delay, the game resumed, and so did the Lady Seminoles’ dominance.

“We still stayed determined. We didn’t let that make us fall back or anything,” Cheyenne said after she and her teammates hoisted the championship trophy in the infield surrounded by die-hard supporters who stayed until the end.

About eight hours earlier, the championship trophy seemed like it would remain out of the team’s grasp. The Lady Seminoles trailed the Senaca Strikers 1-0. Down to their final three outs, they rallied to win.

Cheyenne used her speed to beat out a leadoff bunt. She scored the tying run on a double by Raine. After Sarah walked, Delaney came through in the clutch by laying down a bunt that was fumbled by Senaca allowing the winning run to cross home plate.

“I knew the situation and knew that there was only one out,” Delaney said about her decision to bunt. “I trust my hitting, but I don’t trust it as much as my bunting. I’m not a fast runner, but I know I can get the ball down.”

After falling behind 3-1, the Lady Seminoles scored five runs in the third to take a 6-3 lead. The Rez Raiders knotted it up at 6-6 in the fourth before the Lady Seminoles took the lead for good when Destinee Jimmie reached base on an error and scored the go-ahead run on another error.

The 11-7 win by the Lady Seminoles ended at 10:59 p.m. and set the stage for the winner-take-all game and an early morning celebration.

“I’m proud of the whole team and how they pulled together,” said coach Osceola, who was assisted by Daniel Nunez. “They didn’t quit. When they were down, we had our last at-bat and they pulled through. I’m so proud of them. It was a team effort.”